The world renowned Bob Senter, known among Nordhavn owners as “Lugger Bob” because of his incredible expertise with Lugger diesel engines, arrived on June 23rdfor several days of onboard training for John and Bradley. This included hands-on servicing of both Northern Lights generators (which have Lugger engines) plus both Detroit Diesel main engines (which he recently became an expert on), explanation of various parts and engine workings, labeling of critical parts, and development of our on-going engine room checklist. Bob is also joining us for our cruise south to Florida and we feel fortunate to have his expertise coupled with a great personality.

Bob oversees Bradley and John in the engine room

On June 24th, fellow Nordhavn owners Mike and Maria from Liberty Call and Ron from Alcyone joined us for a dinner meeting of the Bob Senter Fan Club, a great night for getting to know each other, share Nordhavn stories, fill Bob with good food and drink, and pick his brains!

On Sunday (June 25th) I made a final trip to Costco to provision for the next two weeks and our friends Lloyd and Arlene visited the boat and kindly drove my car back to our house. Unfortunately the photo-journalist was on strike so there are no photos of Lloyd and Arelene on board – guess that means they have to come back! After some fabulous crabcakes and lousy service at Stoney’s, we woke the next morning to begin preparations for our departure from Maryland.

There was a lot to do and we were quite busy. We had Neil, a local diver, clean the bottom of the boat, which was covered with growth and barnacles after mostly sitting for six months. Bradley, John, and Bob were busy with tasks in the engine room, filling fresh water tanks, storing gear, and more, while I stored all the provision and readied the interior. During the process, Bradley’s bicycle, which was sitting on the dock, decided to go for a swim, necessitating a bike rescue operation. Bradley donned his snorkel and weight belt, located the bike on the bottom in 12 ft of water, tied a line around it and John hoisted it back up. Bad bike!

On Tuesday we were ready to depart. Our first stop Reedville, about 40 miles away. This will give us a chance to test everything, get our sea legs, then anchor for the evening in a peaceful spot. Our trip was very smooth – minimal winds and calm seas. Our anchorage was quiet and peaceful, great for a swim, though there were plenty of jellyfish about. After swims and showers, we were treated to a free boat wash, courtesy of a nice thunderstorm that left a breathtaking rainbow in its wake. It looked as if the rainbow was actually touching the water! We felt just like the pot of gold at the end of it. A great way to start the trip! 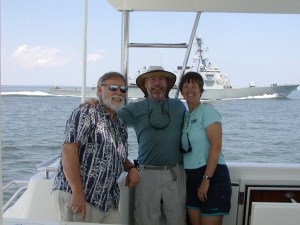 The next morning we departed for the Poquoson River, just south of the York River and very close to the mouth of the Chesapeake Bay where we anchored for the night. We had internet connection and shortly after anchoring we received an email from Bob and Becky, who lived in the house right behind where our stern was pointing. They saw our name on the stern, found our website, sent us an email, then came by to say hello in their Boston Whaler, bringing us some fresh cucumbers from their garden (which later made a great cucumber salad)! We were also visited by a friendly, but questionably sober fisherman who came by for a chat and several small boats that drove by for a closer look. We had a nice swim, showers, taco dinner, beautiful sunset, and good weather forecast for departure south in the morning.

On Thursday we departed the Bay for the Atlantic Ocean with our next destination Charleston, SC, a trip of about 440 miles which will take us about 54 hours. To get to the ocean, we pass over the tunnel portion of the Chesapeake Bay Bridge Tunnel near Virginia Beach. As we were approaching the tunnel, US Warship 55 was behind us, moving much faster and closing rapidly (note that Warships don’t identify what type of ship they are, nor do they show up on AIS – the vessel identification system). So it was just Warship 55. A tug pushing a large barge was coming the other direction and it looked like they would pass right around the tunnel crossing. The tug contacted the warship to request that it reduce speed so as not to cause excessive wake. Then the Warship called us to ensure we were willing to move over to let him pass, as even at reduced speed he was much faster than us. We agreed and expressed our thanks for all they do for “our country”, then realizing we fly a Cayman Islands flag as that is where our boat is registered. The Warship radioman then said he noted our name Shear Madness and wanted to make sure we weren’t planning to do anything crazy. We all had a good chuckled and posed for some photos as the Warship passed us. 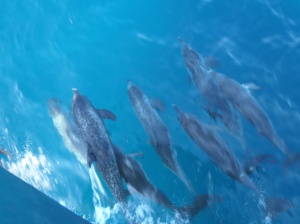 Dolphins on the Bow off North Carolina coast

One of the things we are now doing is to run the engines at max capacity for ten minutes every 24 hours or at the end of every trip. While this burns a lot of fuel, it is good for the engines. We’re also doing some testing on running a single engine at a time – this results in an increased load on the engines (which they like), with some fuel savings, but at a cost of speed. However, running on a single engine at reduced speed gives us increased range.

Now we are in the ocean, just past Cape Hatteras as I write this. We have no internet connection, so I can’t post this until we do, but seas remain calm and we are enjoying the passage. We are about a third of the way to Charleston. I was just summoned to come to the bow to watch an incredible dolphin show! We had dozens of dolphins playing on the bow for quite some time.

End of the Rainbow at Reedville

Bradley, Bob, and John in Pilothous

Dolphins on the bow 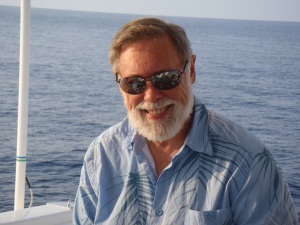 Bob examines the sky (with his eyes closed)

This entry was posted on July 3, 2011, 12:25 pm and is filed under Trips. You can follow any responses to this entry through RSS 2.0. You can leave a response, or trackback from your own site.