With our upgrades complete and the boat looking nice, we departed from Palm Beach just after noon on Friday, August 12 for the 800 mile trip north to Colonial Beach, VA. Our plan was to cruise straight through without stopping, which we estimated would take 4-5 days. The weather forecast was favorable and after a brief stop to clean the bottom of the boat, we were off! On a multi-day passage, we take turns standing watch as someone has to be monitoring all systems and keeping a lookout at all times. When the weather is nice, night watches on the flybridge with a full moon are truly spectacular! Fortunately for us, the weather was very cooperative, with clear skies, calm seas, and a bright moon most nights, punctuated only by an occasional thunderstorm. We could not have had better conditions for the trip!

It was nice to use some of our new systems. Our satellite weather service allowed us to get up to date weather information instantly. We also became fairly proficient with many of the features of our new navigation software (Nobeltec Trident). We did, however, experience a few glitches, most notably with our AutoPilot system and satellite compass. The AutoPilot worked fine steering a course using its internal compass, but would not work when using the satellite compass, or when asked to steer a route (in Nav mode). We did some diagnostics and will spend some time in the coming weeks to diagnose and correct those problems. They did not interfere at all with our schedule and we were able to cruise north in the Gulf Stream (a strong current which flows northward along the east coast), which added more than 2 knots to our average speed (we cruised at close to 10 knots for much of the trip)!

We did not have great luck fishing for the first couple days. While underway in daylight hours only, we trail a fishing line behind the boat, waiting for a strike, at which point, the alarm is sounded by someone yelling “FISH, FISH”. The person on watch then slows the boat down, while someone else takes control of the rod and brings the fish in. Bradley and/or John then bring the fish aboard, determine whether it is a “keeper” and if so, prepare it for the fridge or freezer. Once the fish is landed, we return to cruising speed. Leanne’s first “strike” resulted in a good fight, only to find a large plastic bag at the end of the line! It’s really a shame how much plastic is in the oceans and how much damage it does! Well, there’s one less plastic bag now!

As we passed Cape Hatteras, we were making excellent time. Conditions were still perfect but we had caught only one small fish, a dolphin fish (mahi-mahi) which we had as an appetizer. Soon that was to change! In a span of just a few hours, we caught and kept 4 Spanish Mackerel and 2 tunas. We also caught and released 2 small tunas and 2 small mackerels. We were slowing down so often, we finally had to stop fishing or we would never arrive at our destination!

A US Warship at Sunset on the Chesapeake Bay

By sunset on Monday, we were at the entrance to the Chesapeake Bay. We passed over the Chesapeake Bay Bridge Tunnel, guided by the Cape Henry Tower. Because there is so much shipping traffic in the area, the Tower provides traffic control, much like air traffic control for airplanes. We were in contact with the Tower, and were provided with information about outbound ships so that we could steer clear of them. It was quite helpful to have their guidance, especially as it was now quite dark!

The most exciting moment came just before midnight that night, when suddenly our navigation system went completely dark! We no longer had a chart on our display to steer by. Fortunately, we had backup systems. We had a paper chart readily available. We soon determined that the new computer running the navigation software had crashed. Further investigation led us to the UPS unit (backup power supply) that the computer was plugged into. The UPS is supposed to power the computer in the event of a power failure. For some reason the UPS thought a power failure had occurred and had begun using its battery to power the computer. When its battery was depleted, the computer lost power and crashed. Since we had never actually lost power, we attributed the problem to the UPS unit. We plugged the computer into a direct power supply and soon were back up and online. A good lesson though – always be prepared in the event you lose one or more of your systems!

A Colonial Beach Family comes by for a look

We continued our cruise up the Chesapeake Bay to the Potomac River, then north to Colonial Beach. We planned to stay at the Colonial Beach Yacht Center, a marina I had found online. We knew it would be a bit of a tricky entrance, as the channel is just over 8 feet deep, barely enough to allow us in. Furthermore, because we had made excellent time, we were arriving at dead low tide. To top it off, we arrived on Tuesday, the one day the marina is closed. As we approached the entrance to Monroe Bay, we were able to raise a Navy Range boat on the radio and they provided us with some good information about depth of water and exact location of the marina. Bradley navigated us in with no problem and we found our assigned spot and soon were tied up alongside. The trip had taken less than 4 days and we still had the afternoon to begin washing the boat! (The boat always needs a washing after a trip in salt water).

Colonial Beach is a great spot for us. The people there are very friendly and it is a charming town with beautiful and well kept homes. It’s a bit different than Old Port Cove, where we were neighbors with the 155-foot Privacy and the 164-foot Mine Games (a boat which you can charter for a mere $265,000 per WEEK). Here in Colonial Beach, WE are the big boat and several folks came by for a look. Leanne and I encountered two young men looking at the boat and they asked if it was ours. When we replied Yes, they began asking questions. One asked how we had got the boat here. We explained that we had come up the Atlantic Coast to the Chesapeake, then up to the Potomac River and in through the entrance to Monroe Bay. “No”, he said, “what I meant was How big a trailer you need to move that thing?” His concept of a boat was something that could be put in a trailer. His buddy was soon explaining to him that this boat could cruise anywhere in the world and did not need a trailer!

We’ll be in the Colonial Beach and Washington DC area for the next month or so. Plenty to explore around here! Click on any photo to enlarge. To see a video of Leanne in action (fishing), click here! 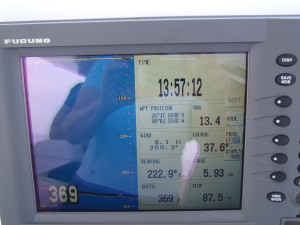 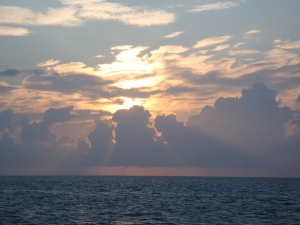 Sunrise and calm seas; what a combination 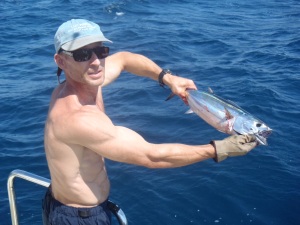 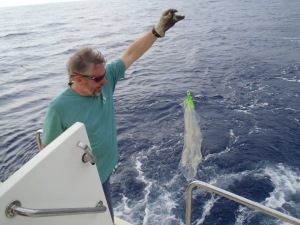 Leanne’s Bag – it put up a good fight!

A Warship on the Bay

This entry was posted on August 20, 2011, 5:41 am and is filed under Trips. You can follow any responses to this entry through RSS 2.0. You can leave a response, or trackback from your own site.