The Paparazzi are out as Shear Madness hits the water!

Shear Madness is back in the water! Much more work has been done and I will provide more details of that work in my next post, but for now, we are tired of talking about work and repairs! Yesterday we conducted sea trials! That means we went out into the ocean to test all the newly installed and/or repaired electronics, hydraulics, bow and stern thrusters, and inverters. Ideally, you do not want to conduct sea trials in calm waters – it’s good to have a bit of seas in order to give the systems a good test. Well, we sure did that! Winds were blowing 25-30 knots as we left the dock. Engines, bow and stern thrusters performed well and soon we were back on the water! We headed down the intracoastal waterway (ICW).

Along for the ride were Brian from Celtic Marine Electronics and Justin from American Bow Thruster (ABT) to test and fine tune the systems they had installed. While still in the ICW we performed some tests and turned some slow circles to calibrate compass and autopilot systems. Brian was able to find and correct a problem that was causing inaccurate heading data to be sent to the autopilot resulting in problems holding a course. Once corrected, the autopilot performed well, so we headed for the open ocean.

Brian and Bradley in calm waters during sea trial

The good news is that the systems, as well as the crew, got quite a good test! As the ICW gave way to the ocean, the wind was a-blowing and the waves were steep and short, resulting in a pretty wild ride! In fact, it was the roughest conditions we have experienced on this boat. Fortunately the boat and the systems handled things pretty well, as did the crew. Since we had not anticipated such rough conditions, we had not adequately secured everything and had a few “flying missiles” and a few crashes and bangs, but no serious damage. After a good run in which we turned in all directions to give the stabilizers a good workout with seas coming from all directions, we turned and headed back into the ICW. We all breathed a sigh of relief as we entered the calmer waters.

While there are still a few minor issues to deal with, the end is now in sight! We are hoping to depart NC within the next week or two. The boat has now been washed and the interior thoroughly cleaned. It’s starting to look like a boat again and not a mad scientist’s workshop. 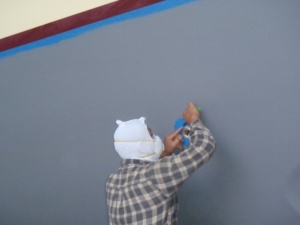 Finishing touches being applied to thru-hulls 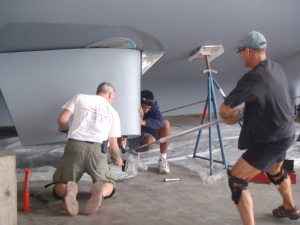 Working on the stabilizers

Propeller cleaned and treated with Prop-Speed

This entry was posted on January 14, 2012, 8:32 am and is filed under Trips. You can follow any responses to this entry through RSS 2.0. You can leave a response, or trackback from your own site.