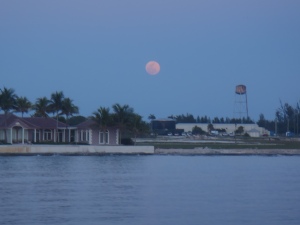 It is finally time to get back into cruising mode! We have chosen the Exuma Islands in the Central Bahamas as our destination. The plan is to depart Palm Beach, work our way slowly to the Exumas, spend 4-6 weeks there, then return to Palm Beach to finish the last remaining details from our repairs and to fix any new issues that come up on this shakedown cruise. On this trip Bradley and I are handling the boat completely on our own.

Once we were finally ready to depart for the Bahamas, the winds decided to blow 20-25 knots from the east for a few days, so we waited for them to settle down. The boat could certainly have handled it, but we were looking for a comfortable and uneventful trip. Finally on May 3 we departed Old Port Cove Marina and made the short (1 hour) trip to Lake Worth Inlet where we anchored for the night, positioned for an early morning departure to West End on Grand Bahama Island. There were two reasons for the short first leg. First, we need a near high tide to safely get out of the marina, so there are only certain windows of opportunity to exit. We also wanted to time our trip so that we arrived at West End in daylight and in time to make it to the Customs office before their 5pm closing. 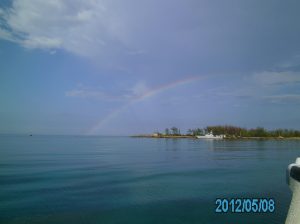 Rainbow at Morgan’s Bluff on Andros

At 54 miles and with the Gulf Stream to cross, that means about an 8 hour trip, so an early morning departure is desired and we wanted to be close to the open ocean for a departure before sunrise (ie, in the dark), Second, we wanted a night at anchor to allow our bodies to adjust to the motion of the boat and to run the generators and make sure our battery charging systems are working OK. The night at anchor was lovely and despite a small problem with the charging system, we were GO for departure!

We woke early and were on our way at 4am the next morning. The trip across was delightful – perfect conditions and all our new electronics performed very well. We arrived at West End, Grand Bahama around noon. The only reason we were stopping at West End was to clear customs and obtain our cruising permit. We did not really want to have to take the big boat in to the marina, and it was low tide, so we decided to anchor outside the harbor entrance, launch the tender, and have Bradley go in to see if we could get cleared in without bringing the boat into the harbor. We had obtained all the forms in advance and everything ready to go. We hoisted the yellow “Q” flag – to show that we had arrived in a new country but had not yet cleared through customs. “Q” means quarantine, from days when incoming boats were quarantined to ensure no infectious diseases were on board and whenever a vessel enters a new country, the first order of business is to “report in”. The Bahamas have so much boat traffic from the US that the customs process is fairly quick and easy. Bradley set off in the little tender and was back in 30 minutes, cruising permit in hand! We lowered the “Q” flag and hoisted the Bahamas “courtesy flag”, a small flag of the country you are visiting,on the starboard halyard which signifies that you have entered the country legally. Our larger, country of registration flag from the Cayman Islands, is flown from the stern of the boat at all times. 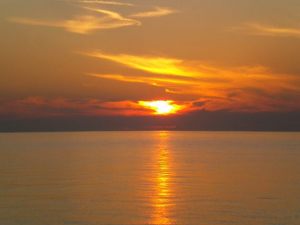 Sunset at Joulter Cays at north end of Andros

Although the holding was poor (meaning the anchor could not really dig in securely), there was almost no wind, so we stayed overnight at our anchorage where we were treated to a spectacular full moon – actually a Super Moon where the moon is at its closest point to the earth and also full. This happens only once a year and it truly was beautiful! The next leg of our trip would be between 50 and 70 miles. We had two possible stopping points with the option to continue on past the first if things were going well. We again departed early – at 3am – and had a fabulous trip in calm conditions. We decided to continue past the first stopping point and travel through the Northwest Channel, arriving at the Joulter Cays at the top of Andros Island around 4pm. 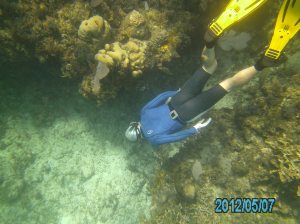 Bradley has a look at a reef

Now it was time for some playing and relaxing. We couldn’t wait to get in the water and do some snorkeling. I also wanted to try out my new underwater camera. The water was warm and crystal clear. We found some small reefs with some nice snorkeling and really enjoyed being back in tropical waters! We then moved a few miles south to Morgan’s Bluff, where there was a bit more shelter and some better snorkeling. We had two nice nights there and took the little tender out for some good rides. While the size of this tender makes it very easy and safe for us to get on and off the big boat, the ride is quite a bit bumpier than the large one we left behind for this trip. This tender is an inflatable with an air floor, which means you REALLY feel the water – each wave is like a speed bump. It’s great for short trips or when the water is flat, but is more of a challenge in choppy seas. We’re still convinced the right answer is something in between the two! 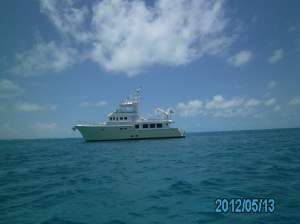 At anchor at Staniel Cay

From Andros, we were set to head to the Exumas. Our plan was to go across the Tongue of the Ocean, then to anchor somewhere on the Exuma Bank. Our start was delayed due to a problem with one of our watermakers (more on technical problems later). But by 7:30am we were underway for an 11 hour journey to Norman’s Cay where we anchored for a night. Next it was south to Staniel Cay. Once on the Bank, depths are much shallower, making for a more nervous journey. We kept a sharp lookout, being careful not to venture into the really shallow parts! Fortunately, the water is crystal clear here and it is easy to see the differences in depths reflected by different colors of the water. Once at Staniel Cay we found a fellow Nordhavn (a 68 footer) with her owner George aboard. George has cruised extensively in the Bahamas and was a great source of information for us since our boats both require the same amount of depth – about 7.5 feet. It was great to catch up with George and he came aboard for a nice dinner on the flybridge. 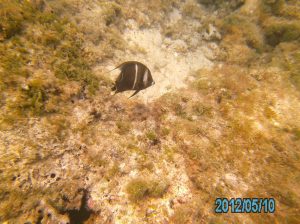 This fish liked having his photo taken – he was quite a ham!

We did a little snorkeling and moved for a day six miles south to Black Point on Bitter Guana Island where we found more good snorkeling and a few small caves that were fun to explore. We are enjoying having some time to relax and catch up on reading. There is no internet access here so we are quite islolated – just what we wanted! As the winds again changed direction, we headed back to Staniel Cay where we visited the famous Thunderball Grotto, a snorkeling cave made famous by the James Bond movie Thunderball. We met a nice couple aboard a sailboat, Dianne and Walter, and visited each other’s boats for happy hours. We’ll hang out here for a little while before heading south, ultimately to George Town to pick up some guests in a couple weeks.

Below are more photos and below that is some information about the technical problems we experienced on this trip for those who are interested.

There are also some new book reviews and a 3 minute video of the highlights of our trip so far. Leave a comment or click here to send me an email. 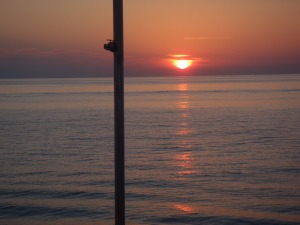 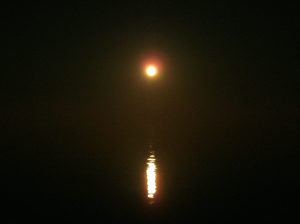 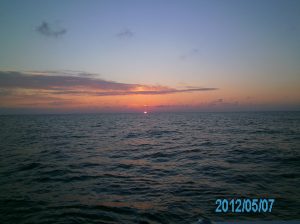 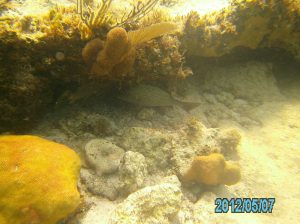 A nice reef fish, but a little too small for dinner 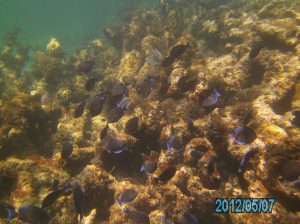 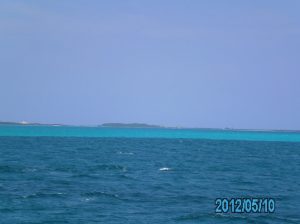 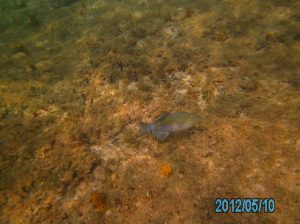 Fish on the Reef at Black Point 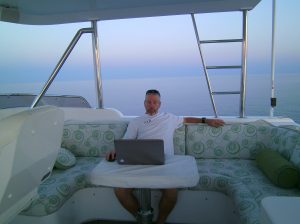 No internet access, but the flybridge is a great place in the evening! 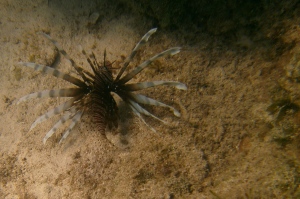 Lion Fish – an invasive species that is damaging the reefs 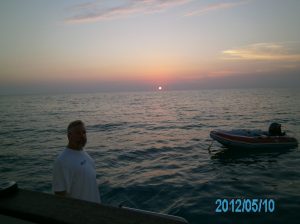 Bradley and our small tender at sunset in Staniel Cay 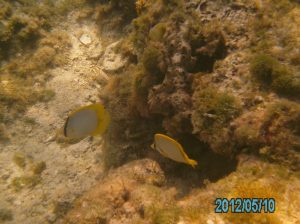 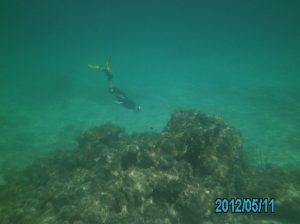 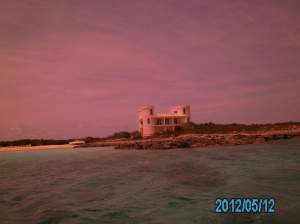 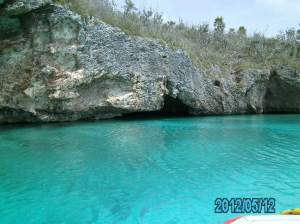 Cave at Black Point from the outside 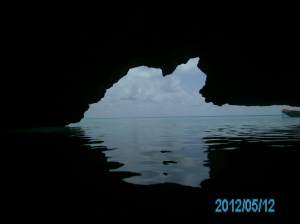 Cave at Black Point from the inside 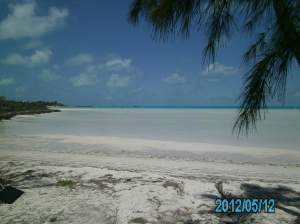 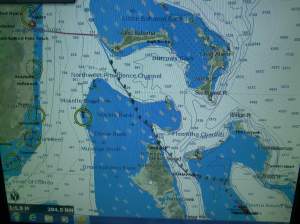 Our Route from Palm Beach to the Exumas 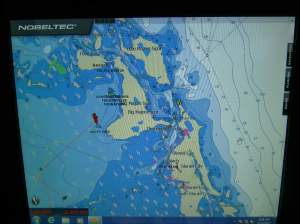 Our anchorage at Staniel Cay/Big Majors

Warning – this section is only for those who are interested in technical aspects of equipment and problems. No mention of sunsets or rainbows…….

This trip is serving as a shakedown cruise for all the new equipment we have installed over the past eight months. We expected to have some problems, but for the most part things have worked well. Here are a few of the problems we have found:

Otherwise, things have been working pretty much as designed. It’s been a good opportunity to learn about all of our new electronics. We can now program custom displays on our Furuno RD-33 (wind meter), use the Furuno radar much more effectively by setting up guard zones and automatic target acquisition, which then overlays onto our charts, use the Nobletec logging function to determine if we are moving from our anchor location (which we can then monitor from the master cabin TV), and much more!

More details about all the lightning strike repairs are still being written.

This entry was posted on May 16, 2012, 3:45 pm and is filed under Trips. You can follow any responses to this entry through RSS 2.0. You can leave a response, or trackback from your own site.