We arrived back in the Chesapeake Bay after a great trip from North Carolina with John and Patti aboard.

They were terrific crew and as you can see, Patti is also a great writer! We anchored in Mobjack Bay, not far north of the Bay Bridge/Tunnel. I decided to contact a couple friends in the area. First, my good friends Gary and Cookie who live in Virginia Beach surprised me with the news that they have a newborn daughter! Since this had happened less than two weeks previously, we decided to defer a visit to them until we are on our way out of the Bay. Next, I decided to call Bob and Becky, who we met last June when we anchored in front of their house on the Poquoson River and they came out in their Boston Whaler to say hello and to bring us some fresh vegetables from their garden. They were home and invited us for drinks at their place. We also asked their advice about where John and Patti could rent a car to get back to their home in Annapolis. The Newport News airport seemed a good choice and Bob and Becky even volunteered to give them a ride there as it’s very close to their home. After a great visit with Bob and Becky, we bid farewell to John and Patti. 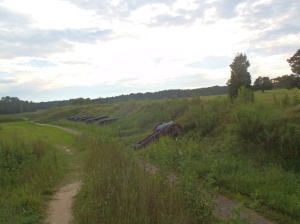 On August 31st while still anchored at Mobjack Bay, we had a Blue Moon – the second full moon of the month. It was a crystal clear night and the moon was truly spectacular. We were all alone in the anchorage – it doesn’t get much better than that! The moon was still shining brightly the next morning. Too bad John and Patti missed it by one day! We then headed up the York River and anchored near Yorktown, famous for being the place where General Cornwallis surrendered during the Revolutionary War. We spent a couple days exploring Yorktown, eating crabcakes at the Yorktown Pub and walking around the battlefield. We also took the tender up the York River about 23 miles to the town of West Point, VA, the birthplace of Lewis “Chesty” Puller, the most decorated marine in US History. West Point is a charming small town and home to a paper mill, but there is no pubic dock or marina to leave a tender and go ashore. Not to worry – some locals encouraged us to tie up to their dock and we went for a walk around town and light lunch. We started back to Yorktown, amazed at how few boats were out on the river on the Sunday of Labor Day weekend. It’s a nice wide and deep river and a perfect sunny day but we probably saw only about a dozen boats in 20 miles! 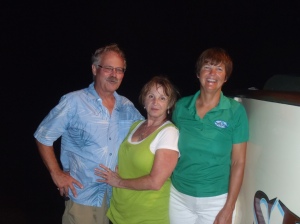 Gary and Patti come for a visit

From the York River, we headed towards Deltaville, which is on a peninsula between the Piankatank and Rappahanock Rivers. We anchored in Hill’s Bay in the Piankatank. We have some friends, Gary and Patti who live a ways up the Piankatank and they came down in their boat for drinks and dinner on board. While out exploring in our tender, we also met Maxine and Michael, who it turns out own the house we were anchored in front of. We invited them over for drinks they next day (they arrived just after a nice storm blew through) and went to dinner at a local restaurant on Gwynn Island – excellent food! Just as we were leaving for dinner, another local came by in his boat on his way to watch the sunset. His name was Richard and he and his wife Vera invited us to his home for dinner – what a treat as Vera is a gourmet cook! We also left with bags of fresh basil and chives from their garden. We had another dinner invitation from Maxine and Michael to go to their house, where we were able to keep an eye on the boat during another storm.

We visited the Deltaville Boatyard which has a great reputation. Although they do not have a lift large enough for Shear Madness, we talked to them about servicing the outboard motors on the tender and were impressed by the managers and the outboard mechanic. In typical boat fashion, what started as one simple project soon became several not-so-simple ones. The tender was lifted out of the water and work began. Soon we found more parts that had to be ordered and more work that needed to be done. While the mechanical work was going on, Bradley and I spent most of four days waxing the bottom and cleaning the inflatable tubes and cushions. While it took longer and cost more than initially estimated, we found and corrected several potential problems and the tender is now in great shape. While at the boatyard, we also engaged Jim the electrician to help track down some lingering issues with the meters that monitor our battery charging. We have several other small projects that they will do as well, so we plan to return to Deltaville in October.

Neal works on the tender

At Deltaville we also saw Ray and Susan on their Outer Reef yacht Copeing and enjoyed drinks with them. Ray even had some genuine moonshine but one sip of that was enough for me! We also met Michael, a sailor in his 80’s who lives aboard his catamaran “Wind in the Willows” and cruises every year from Deltaville to the Bahamas for the winter. He has a tender which he rows – no outboard motor. He had his boat hauled out and was working on the bottom himself. He also gave an informal seminar about cruising the Bahamas for several of us at the marina. He’s a well-know and inspirational character here and in the Bahamas and we felt fortunate to have made his acquaintance.

We also met newlyweds Aaron and Liz and their dog Jacqueline Cousteau. They are living aboard their sailboat and we all rode bikes out to dinner one night and visited each other’s boats. We also welcomed aboard Marc who will be cruising with us for the next month. Unfortunately the photographer failed to get photos of these folks! 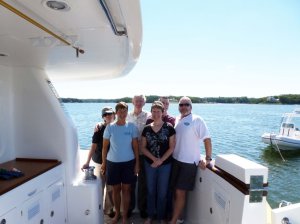 Nancy, Luther, Cindy, and Bill with Bradley and Kathy aboard Shear Madness

Our next stop was the Great Wicomico River where our friends Nancy and Luther have a weekend home. We found a nice anchorage right in front of Tiffany Yachts, a local boatbuilder and a quick call to their office resulted in permission to tie our tender up at their dock when we went ashore. Nancy’ sister Cindy and husband Bill joined us for a day of bridge playing and great food at Nancy and Luther’s. Luther is an expert player and was able to coach us all on ways to improve our bidding and playing. Nancy fixed a fantastic dinner of slow cooked pork shoulder and lima bean salad. On Sunday, they all joined us on board Shear Madness for a brunch of bagels and lox and a few more hands of bridge. We spent a couple more days in the Great Wicomico, exploring by tender and ashore, with Bradley and Marc cleaning the bottom – this needs to be done regularly to prevent growth from occurring. 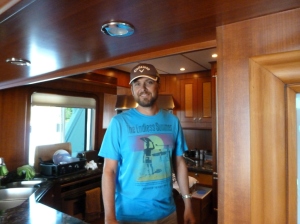 Marc joins us to cruise for awhile

Finally it was time to depart Deltaville for the trip north to Solomons, MD. All was fine – for a while! We were running on autopilot and I was doing a log entry when Bradley came to the pilothouse and asked why I had turned the Auto off. I didn’t know what he was talking about, but when I looked the Autopilot display was blank – nothing. And the boat was off course. After correcting the course manually we started looking for the problem. We had a few phone calls with our electronics expert Brian and determined that we do indeed have a problem that will need further diagnosis. I’ll report more of the technical details in the next post. Otherwise it was a great trip and we pulled into Solomons Yachting Center by mid-afternoon, only to discover that our Sub-Zero refrigerator was running warm and the “service” light was on. Ah, the joys of cruising!

As we came into Solomons, we saw a Nordhavn coming out. Unable to read their name and not seeing them on AIS, I called on the radio and soon found it was Egret, a well-known Nordhavn 46 that circumnavigated the world, keeping a detailed blog of their experiences. We learned from them that our friends Braun and Tina and their new Nordhavn Ocean Pearl were in Solomons. We look forward to catching up with them. No sooner had we docked and finished a quick washdown of the boat than yet another Nordhavn came into view – Tango, a beautiful 78-footer (this is the 76 with a two foot extension to the swim platform and a close cousin to Shear Madness). We were only able to say a quick hello but it was good to see them.

After talking to a Sub-Zero repairman, we determined that the cooling fan was bad and were able to temporarily bypass the problem by positioning an external fan to blow through the condenser coils. That will work until next week when the fan can be replaced. So our food is safe for now! Bradley and I rented a car to drive to Baltimore to attend Trawler Fest, a boat show targeted to people who like cruising slowly on trawlers. We caught up with many good friends, including Jeff from Nordhavn and Patti and John. I wore my Shear Madness T-Shirt and as a result met several folks from the Nordhavn Dreamers group who I had only know via email before. We had a fabulous dinner in Greektown at Samos with Ron and Wendy and Bernie and June. The Ravens fans were out for a home game against the Browns, which the Ravens did win.

We’ll be in Solomons for a week before heading back to Deltaville. Please leave a comment below or click here to email us. Check out new book reviews and see our latest 3-minute video. 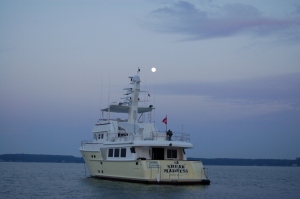 Where do you think this is? 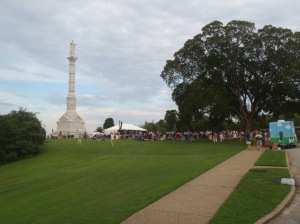 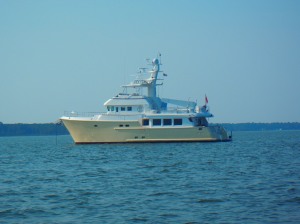 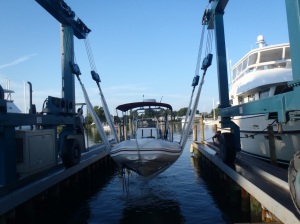 Tender in the lift 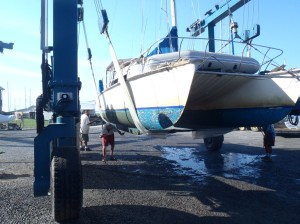 Michael scrapes the bottom of Wind in the Willows

Michael gives a talk about the Bahamas

This entry was posted on September 28, 2012, 1:08 pm and is filed under Trips. You can follow any responses to this entry through RSS 2.0. You can leave a response, or trackback from your own site.