We had a bit of excitement last night after dark. About 9:30pm we started getting wind gusts of 45+ knots when we heard an ominous noise from the bow. We donned our foul weather gear and went out to investigate. Our intuition was correct – the snubber line had snapped, going into the water and taking the claw connecting it to the anchor chain along with it. The rubber hoses which provide chafe protection had worn through, allowing the line to saw against the stainless steel claw until it was weakened enough to break during a strong wind gust. While had a spare snubber line at the ready, we had to determine how best to rig the backup. I went inside to start the engines so that we would be prepared in the event things took a turn for the worse. Bradley focused on getting another line ready, using one of the claws from the anchor braking system. We were disappointed to find that our forward (bow) deck light was not working, so had to work by flashlight. I also discovered that the batteries in two of our “ready” flashlights with rechargeable batteries had not held their charge. Fortunately we keep several waterproof lights that were ready to go, so I just had to grab another one. 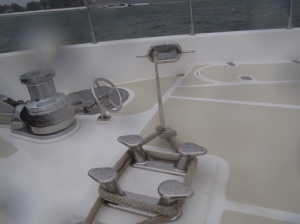 Once Bradley had the new snubber line ready to deploy, we decided to take the opportunity to let out some additional anchor chain. As they say, anchor chain does no good sitting in the anchor locker! So out it went. We now have 115 meters of chain out (over 345 feet). After little more than an hour of the problem occurring, we had the new snubber in place and were set for the night. Given the darkness and the need for both of us to be focused on getting the snubber re-set, there are no photos of this actual event. The winds eased a bit over the next hour, allowing us to get a good night’s sleep. We are grateful to have the Nobeltec display available on the TV in our cabin as it allows us to simply look up and ensure that we haven’t moved outside our swing radius.

The project for this morning was to put good chafe protection in place on the new snubber line and to devise a backup solution in case we lose this one. Braving the wind and rain, we set out on deck. We needed to bring the anchor up enough to ease the tension on the snubber, untie it from the deck cleats, slip the protective hose over the end, then re-tie it and position the hoses to ensure they are doing their job. Not a complicated task, but the weather is now downright chilly (41F) and the winds were a sustained 30+ knots with gusts in the 40’s, accompanied by a driving rain. But Captain Bradley soon had all in place and we were once again sitting safe and secure.

A check of the tender deck and flybridge revealed that the tie-downs on the helm chairs in the flybridge had come undone and the line was lying in a tangle on the deck as the chair covers flapped more than I wanted to see! It took ten minutes to untangle the line and my fingers haven’t been that cold in a while! But again, this was not a difficult task and we soon had the chair covers secure again.

We returned inside and shut off the engines. The engine room was nice and warm, making it a good place to hang our wet weather gear to dry. For now, we are once again safe and comfortable. The worst of the storm should pass by this afternoon and evening. As it does, we expect the winds to shift direction from the north to south/southwest. This will be the point where we have the least protection from the wind in this anchorage, so we are hoping we do not have to move! Thus far, we’ve been reasonably protected and have only seen gusts of 45-48 knots. We’d like to keep it that way! Thanks to all for your concern and comments! 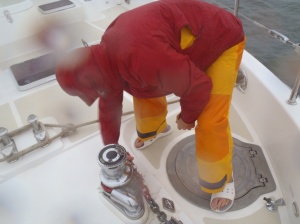 Securing the anchor by setting the brake on windlass 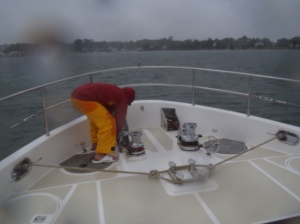 The Shenandoah Flag is riding out the hurricane with us 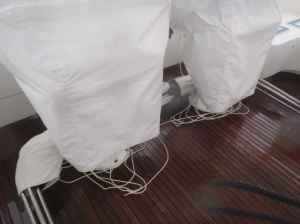 Tie Downs on helm chairs in flybridge have come undone

Some of the flybridge settee hatches are losing their protective tape 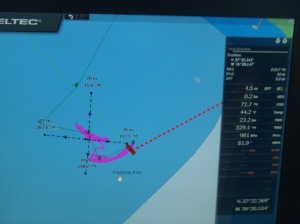 This entry was posted on October 29, 2012, 4:34 pm and is filed under Trips. You can follow any responses to this entry through RSS 2.0. You can leave a response, or trackback from your own site.