We have continued to enjoy the Bras D’or Lakes with its majestic scenery, bountiful bald eagles, and plenty of wilderness to explore.

Tish (from Kittiwake) and I continued to explore by kayak and on land and Tish made a great discovery – wild blueberries! They were plentiful and ripe. When we first discovered them, we were not well prepared as we had only one small zip lock bag and insufficient bug spray for a lengthy expedition. We gathered a bagful which made some delicious blueberry muffins and returned the next day ready for pickin’. Soon we had several containers full – enough for a nice blueberry cobbler with plenty left for our morning breakfasts of fruit and yogurt.

We continue to enjoy the periodic company of Summer Star, Bluewater, Argo, and Kittiwake. Cruising as part of an unofficial, loose group has added a new dimension to our cruising. While we are not on any official schedule and often go our own ways and do our own thing, it’s fun to get together for dinner or golf or shopping or to brainstorm over some boat problem or to plan routes to various destinations. It’s definitely been fun getting to know our new friends and we are talking about cruising in this area again next summer.

Bradley returned from his visit to Florida for his father’s birthday party which was a big success. Lots of friends and family attended and Bradley enjoyed catching up with them all. Bradley’s cousin Mark from Oregon was not able to attend the party in Florida because he was vacationing in Nova Scotia! Turns out he was staying not too far from Baddeck, where we were anchored, so Mark, his wife Kris, her brother Kurt and wife Sally stopped by for a visit. As luck would have it, it was pouring rain but they survived the 20 minute tender ride out to our anchorage. We had a wonderful lunch, complete with local smoked salmon and homemade wild blueberry cobbler and enjoyed their visit very much. Fortunately the rain abated by the time we left to drop them off. 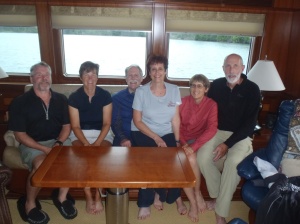 All too soon it was time to head back to Halifax where it was my turn to fly to Florida to visit my in-laws, then on to Virginia for a couple days. Tyler was also returning home to Alabama to attend his sister’s wedding. Summer Star was also heading back south, so we rendezvoused at St. Peter where we enjoyed a nice dinner out at the Bras D’or Lakes Inn along with their onboard guests JP and Diane. We traveled together through the St. Peter Canal, but then Summer Star, a much faster boat at a cruising speed of almost 9 knots, took off, leaving us to follow in her path.

After a brief stop in Little Liscombe Harbour, we were ready for an overnight run to Halifax. 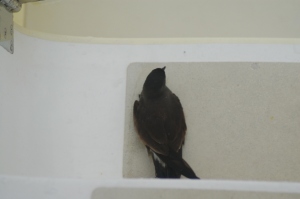 Weather conditions were good, with light winds but fog set in just before our arrival at the Royal Nova Scotia Yacht Squadron. It was so thick we could not even see the docks and since it was a tight fit for us to get in, we anchored until the fog lifted enough to see where we were going. We docked with no problems and soon discovered a little hitchhiker – a small bird had somehow got itself stuck in the space between the aft step and the door. He seemed a little confused but after we opened the door and he sat for a few minutes to collect himself, he flew off.

There are a few new videos – two short photo slideshows of our little cruising group Part 1 and Part 2, one on anchoring, and one called “Why do we Cruise?” which shows some of the “good stuff”, including getting mooned by a bald eagle. Each video is 4-6 minutes long. Click on any photo to enlarge and don’t be shy about replying and letting us know what’s up with you! I’m happy to say that there have been no technical issues or problems worth reporting!

The beauty of the Bras D’or Lakes 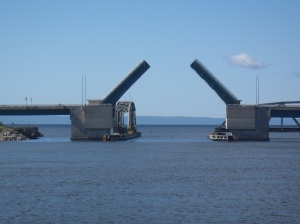 Bridge opens at Barra Strait – we need to stay right in the center!

Tyler practices with the sextant 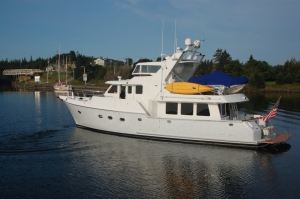 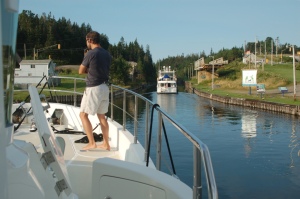 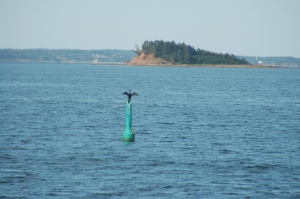 A loon near Wedge Island – wonder where that name came from! 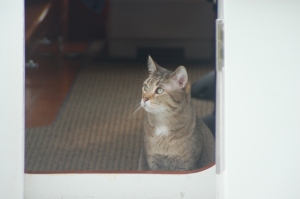 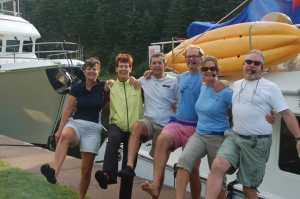 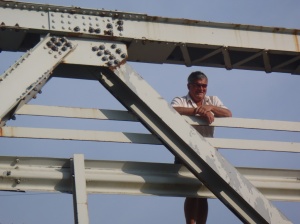 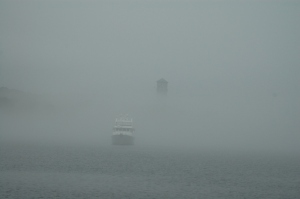 Summer Star arriving at Halifax in the fog

Tyler Up the Mast 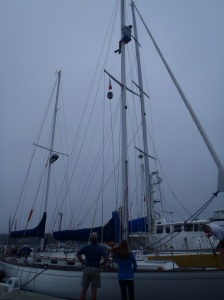 Tyler helps a neighbor in Halifax by going up the mast

Kurt, Sally, Kris, and Mark show off their new shirts

Enjoying a tender ride to town

This entry was posted on August 30, 2013, 11:02 am and is filed under Trips. You can follow any responses to this entry through RSS 2.0. You can leave a response, or trackback from your own site.