My last post was published prematurely (accidentally hit Publish instead of Save Draft), so I’ll begin where I left off and add the missing photos! We anchored in Mader’s Cove on August 26th where I set off to meet our new friends. First I met Susan and Paul, who own and operate the Edgewater B&B, a lovely place right on the water in Mader’s Cove. Next was Bob and Valerie, who live nearby.

Both these couples had provided specific instructions for finding their homes in their emails to me. I simply knocked on the door and said “Hi, I’m Kathy from Shear Madness” and it was like we were old friends who hadn’t seen each other in years rather than strangers who had never met. I invited Bob and Valerie to come out to the boat. “Oh, we’d love to”, Bob replied, “but we have a neighborhood party tonight”. About 2 seconds later he said “you’ll just have to come with us”! And thus we attended a Mader’s Cove neighbors party at the home of Hal, a hearty octogenarian who was full of stories. Here we met Bob and Betty, who shared an interest in bridge and soon a bridge game was arranged at their home.

Bradley needed to return to FL for another visit with his father, so we decided to move the boat around the corner to nearby Princes Inlet where we would be protected from any bad weather. Soon we were snug and secure, near the Lunenburg Yacht Club, which is located on Herman’s Island, five miles from Lunenburg.

It’s a friendly and welcoming club and a good base of operations. We also went ashore on the mainland in a neighborhood called Sunnybrook, tying up at what looked like a small community dock. It proved to be a private dock, however, and soon the owner, Graham, appeared – to tell us we were welcome to tie our tender there whenever we wanted. He then proceeded to ask if we needed a ride anywhere or if there was anything else he could do for us.

We were in the process of arranging Bradley’s trip back to Florida and trying to figure out how to get him to the airport in Halifax, a trip of about 60 miles from our location. Susan and Paul kindly offered to let us use their car so I could take Bradley to the airport. Soon he was off and I was back on the boat. Along came Ron and Nora in their small boat to introduce themselves and invite me and Tyler to dinner. Ron related how he had met another Nordhavn earlier in the year and had watched him cruise around the anchorage looking for a spot to anchor. When Ron asked him what criteria he had used to select a spot, the fellow said he had been looking for somewhere he could pick up a wifi signal! I related how our onboard system could see several wifi networks, but that they were all secured. We were not able to receive the Yacht Club’s unsecured connection from our anchor spot. So we had to rely on our limited and expensive Bell Alliant sim card for email access. Well, Nora soon came to the rescue. The next day she contacted neighbors near our anchorage and soon provided a password so we could connect and enjoy unlimited internet access – just in time for two days of pouring rain where we were mostly stuck onboard.

Princes Inlet offers plenty of options for exploring. There are lots of small islands, accessible by kayak, plenty of territory to explore by tender, a beautiful hiking/biking trail that goes to nearby Lunenburg, and lots of great walking. I decided to take a couple trips into Lunenburg and visited the Fisheries Museum, which was great. It also turned out that I arrived just in time to see the re-launch of the Bluenose II, the replica of the famous schooner which has been undergoing a 2 year refit. The museum tour included the chance to go onboard a couple boats, including the Theresa E. Connor, an old fishing schooner. Here I met George, who was there to answer questions. We got to talking and it turns out he is good friends with Rob and Tish from Kittiwake, who were our cruising companions for several weeks.

On Friday evening I went ashore to the Yacht Club and stumbled upon a cocktail party for the Nonsuch rendezvous, a group of about 15 sailboats who were together for a weekend of fun and racing. They invited me to their party and later to their dinner and it was a great chance to meet some new friends and learn about the Nonsuch boats. I exchanged boat tours with Jane and Jamie on Dexterity and must say I was impressed with the layout and space on their 30-foot boat. I also met Roy and Barbara, another couple who had emailed me in Mader’s Cove and who came by for a visit, bringing a huge container of blueberries picked from their backyard. 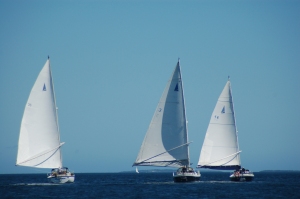 We enjoyed having Bob and Valerie and Ron and Nora over for dinner and I played some more bridge and did some local geocaching. Susan and Paul again loaned me their car so I could pick Bradley up at the airport on his return and we are now beginning to plan our trip back to the U.S. I’ve updated my book reviews and all previously posted videos are available on my youtube channel. I’m very pleased that there are no major technical issues to report, but I did promise some photos of our Spectra soft shackle for our snubber line and these are included at the end of the photo gallery. Finally, for those so inclined, please keep Wilfred’s wife (who I reported in my last post had suffered a fall) and Bradley’s father Ted “Mr. Magnificent” in your thoughts and prayers.

These cows have a scenic pasture!

Kathy with Wilfred on the Second Peninsula 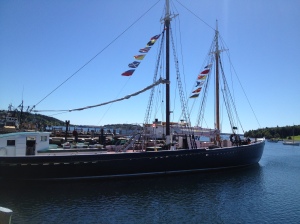 The Theresa E. Connor at the Fisheries Museum in Lunenburg 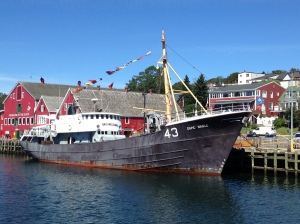 The Cape Sable fishing trawler at the museum 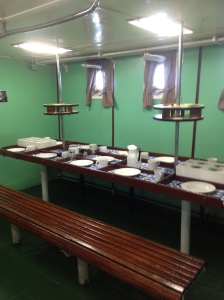 Inside the Cape Sable 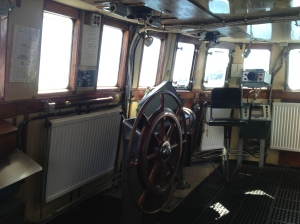 Wheelhouse on the Cape Sable

Bluenosee II is floating again after a lengthy re-fit 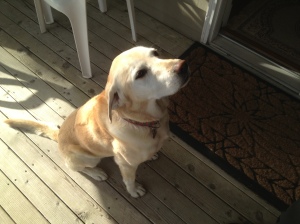 Kaylee provided me with a doggie fix 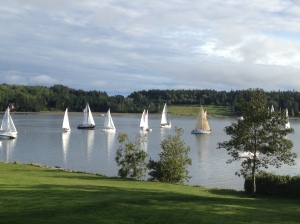 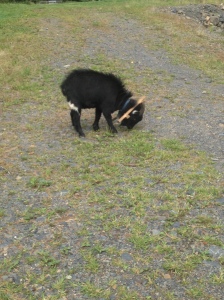 A geocache search took me here

A beautiful resting place for all kinds of loved critters

Halifax Costco just before opening – just like the US! 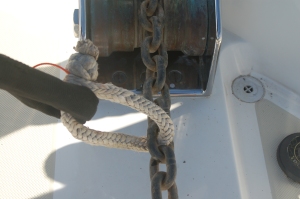 Our spectra soft shackle for the snubber line

Our Spectra soft shackle for the snubber line

This entry was posted on September 11, 2013, 4:16 pm and is filed under Trips. You can follow any responses to this entry through RSS 2.0. You can leave a response, or trackback from your own site.