On April 18, April, my step-daughter, departed to head home to Maryland and Gary departed to meet a friend in Nassau for a long weekend. We dropped them ashore at Fernandez Bay for their flight out of Old Bight airport, then pulled anchor and headed north to Arthur’s town. We had some perfect weather and took the tender out near Little San Salvador where we enjoyed some very nice snorkeling. Bradley speared a couple of nice size grouper and we saw plenty of fish, a large turtle up close, and several sharks.

Kayaking with megayacht Wheels in the background (Photo by Darren L.)

When we returned, a large mega-yacht, Wheels, had anchored in the same bay. She’s a 150-foot or so boat, apparently owned by a prominent Nascar guy. She was loaded with toys – an 80-foot fishing boat, a smaller tender, jet-skis, kayaks, and more.

I took the kayak for a long paddle up Orange Creek, a shallow but very scenic creek that runs north from Arthur’s town. On the way back to the boat I stopped in at the grocery store at the Orange Creek Inn. As I was securing the kayak to a dock, I noticed a man nearby with a very nice camera taking photos of the boats at anchor. We struck up a conversation and he introduced himself as Darren. His mother is the owner of the Orange Creek Inn and Grocery Store. He walked with me up to the store and introduced me to his mom. After picking up a few fresh veggies and some milk, we walked back down to my kayak and I invited Darren to come out to Shear Madness later that day.

Darren on board with his new shirt

Darren didn’t have a boat so we arranged to pick him up in the tender at 5pm. But that was low tide and the entrance to Orange Creek is so shallow that even the tender can’t get in. So Darren had to wade out to meet the tender but soon we had him aboard. We spent a wonderful couple of hours in the flybridge and learned a lot. Darren was born in Nassau but had grown up on Cat Island after his parents decided to move there. He has been living in the US for the past few years and had returned to Cat Island six months ago to help his parents when his youngest brother had moved to Turks and Caicos to take a job. He was planning to return to the US soon, but had a lot of great insights about the Bahamas and Cat Island in particular. We greatly enjoyed our discussion with him.

We enjoyed some more nice weather and some snorkeling but all too soon it was time to head back to the US. Our destination was North Palm Beach, FL, where we planned to stop in for a week to address a few boat projects and drive to Naples to visit some friends and family.

Our passage was about as good as it gets! We had prefect weather (for a trawler that is) with very little wind and seas that often looked more like a lake than an ocean. Our trip was 270 miles, taking about 36 hours. Along the way, we caught a 20-pound Mahi-mahi (aka Dorado or dolphin fish). That was quite exciting as even when we slowed to idle speed we were still doing 4 knots. I had to turn the boat around to head back towards the fish the while Bradley reeled it in and Gary stood by with the gaff to bring it aboard. It was a beauty – I think the largest fish we have caught so far. Soon it was filleted, vacuum sealed, and in the freezer and we were back underway. The rest of the trip was uneventful, but we arrived at the entrance to Lake Worth inlet at night. Hoping to anchor for the night just inside the inlet, we were disappointed to find it crowded with boats, leaving no safe place to anchor. So we decided to continue on to Old Port Cove marina, a little more than an hour away. We prefer to go to and from Old Port Cove at high tide or on a rising tide as there are some shallow spots where we can easily touch bottom. But the tide was falling and it was a dark night. Fortunately we had good track lines from our previous entrances and exits and with careful navigation and Gary on the bow using his young and sharp eyes to look for any possible trouble, we made it to the marina with no problems. Just after midnight we secured to the dock, celebrated our safe arrival with a drink, and settled in for a good night’s sleep. We had several issues to address in Florida and had scheduled people to come to the boat so that we could hopefully turn everything around in just over a week. For a list of projects and technical issues, scroll down below photos.

For the weekend, we rented a car and drove across to Naples to visit Bradley’s sister and mother for an early Mother’s Day. We watched the Kentucky Derby and I got to play golf after many months of not touching a club. I’m thinking I should have long layoffs more often, as I had 3 birdies in the first 5 holes! I think that’s more birdies than I had in all of 2013! I also drove to Vero Beach to visit my sister Joan, her husband George, and our cousin Bri and daughter Katie, who drove from Central Florida. We had a great visit, including some leftover Kentucky Derby mint juleps!

Back at Old Port Cove Marina where there are always plenty of Nordhavns, we met Spirit of Ulysses, a 76-foot Forward Pilot House design. This is the exact same boat as Shear Madness, except with a four-foot extension of the aft deck. Next to Ulysses was Tango, a 76-foot Aft Pilot House. It was the first time we had been together with three boats of the 72/76 series. We had a great time getting to know Richard from Ulysses and we also met three new couples who have recently purchased or are in the process of purchasing Nordhavns and enjoyed dinners out with each of them.

We also caught up with friends Tom and Marlene from Jupiter and Bina from Singer Island for a wonderful Thai dinner. Tom and Marlene had just returned from a trip to the Bahamas aboard a friend’s boat – named Shear Madness! This is a boat owned by Bruce and Rhonda Shear and we had met them briefly a couple years ago during another dinner with Tom and Marlene. In all our cruising, this is the only other Shear Madness we have ever met, and Tom and Marlene just happen to be good friends with both!

Another beautiful sunset at sea en route to Chesapeake Bay

Then it was time to begin the next leg of our journey – 720 miles north to the Chesapeake Bay. The trip was pleasant – we had winds of 10-20 knots most of the way but mostly from the southeast or southwest, so it was a comfortable ride, though not quite calm enough to put out the fishing lines. We were in the Gulf Stream, a strong current which flows south to north, so our speed was over 9 knots for much of the trip (we normally average 7.5 knots). We arrived at the entrance to the Bay just around midnight and dropped anchor for the night, in what we dubbed the “heavy metal pasture”. This is an area near the Bay Bridge tunnel where large ships anchor, waiting to go into port to take on loads. There are often more than a dozen of them waiting for something and we snuggled up among them for a comfortable night. In the morning we headed in to Portsmouth, VA, just across from Norfolk. Unlike our passage where we rarely saw other boats, this short trip required quite a bit of attention as there were big ships, tugs with barges, sailboats, and small motor boats everywhere!

Soon we were docked at the Tidewater Yacht Marina and soon another Norhavn came in – it was the 50-foot Serenity. Serenity and Shear Madness have one thing in common – they both began life as “The Good Life”, both built by a couple named Adie and Dudley, who owned several Nordhavns. Both these boats are now being greatly enjoyed by their new owners and we are very fortunate indeed to have a boat that was commissioned by people as knowledgable as they were! Another boat soon arrived that we also have something in common with – it was the other Shear Madness! They are on their way north to Nantucket but stopped in to wait for some better weather. We had a chance to go out for a fabulous dinner with Bruce and Rhonda and really enjoyed getting to know them. Their Shear Madness is a 90-foot Ocean Alexander, a beautiful boat but much different than ours. They cruise at 13 knots, burn 60-70 gallons per hour, and primarily do coastal cruising as they carry about 3000 gallons of fuel. We cruise at 7.5 knots, burn 8 gallons an hour, and go wherever we want!

In Portsmouth we also had a chance to visit friends Gary and Cookie and little Ruth, who is now 21 months old and already an accomplished swimmer! Gary and Cookie have a pool, so Ruth has been getting swimming lessons for several months and can already turn herself over to float and propel herself short distances through the water. She is also awfully cute!

We left the boat in Portsmouth so that we could do a short trip to DC and NY for some family visits and business meetings. There is a video of our passage from Cat Island to Florida (6.5 minutes) and one showing some underwater shots of our anchor and snubber line (2 minutes). Scroll down below photos for more technical information. Please send us emails or comments – we love to hear from you!

Gary enjoys a shower at sunset 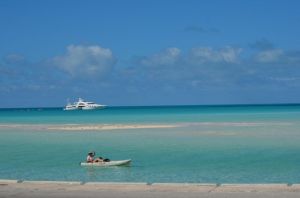 Kayaking with megayacht Wheels in the background (Photo by Darren L.)

Bringing the fish aboard 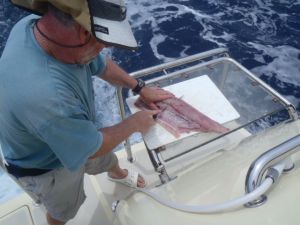 Lots of fillets for the freezer

Sunset on the way from Cat Island 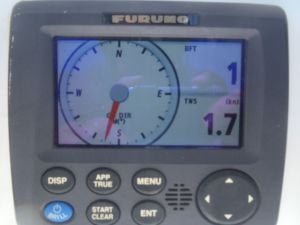 1.7 knots of wind, great for a trawler, not so much for a sailboat! 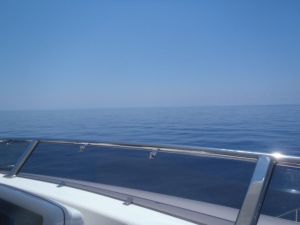 About as flat as the ocean can get 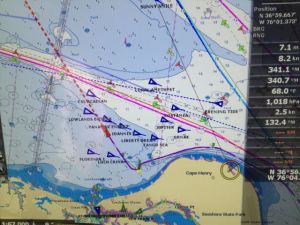 AIS signals of all the ships in the “heavy metal pasture”

A few of the ships

One of the strange vessels around Portsmouth 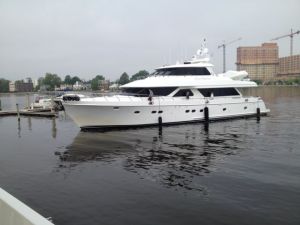 The other Shear Madness arrives in Portsmouth, VA

Below are a few of the issues we had to address in Florida:

This entry was posted on May 18, 2014, 3:40 pm and is filed under Trips. You can follow any responses to this entry through RSS 2.0. You can leave a response, or trackback from your own site.