Well, Poseidon/Neptune and Zeus and the ice gods have finally aligned, and are looking favorably on us.  It is Friday morning and we are anchored at Baddeck on the Bras d’Or lakes.  Migration  (a Nordhavn 68) has arrived to join us and Adventure (Nordhavn 55).  We had a very fresh Chinese meal out last night together and we are ready to depart.   However, after returning to Migration, they found a problem with one of their circulating pumps, so the decision was made for Adventure and Shear Madness to depart as scheduled at 07:30 Friday 11 July, while Captain Gulliver sorts out the issues on Migration.  We will sail to the West Coast of Newfoundland (NF), aiming for either the Bay of Islands or Bonne Bay – where we plan to meet Migration when they arrive.  Since Migration has already cruised NF, this gives us a day or two to see & experience some of the grand beauty of this province.

One bit of exciting personal news – I am a grandfather again! Austin Ryan was born on July 8 and Margy, Bryant and big-brother Tyler are all doing fine!

We have a perfect weather window for the crossing, light winds blowing from the SW and our course will be mostly NE.  07:30 has arrived, our anchors are up and we are underway.  As we exit the lake, we have a helpful discussion with a local tour boat operator, because even though we planned our departure to catch a ride on the ebbing tide, it seemed we are early.  In a couple of spots our speed dropped to 5 knots SOG (speed over ground), clearly indicating an adverse current.  He informed us that it is not uncommon for the current to run 1 to 2 hours late.

It was agreed between Adventure and us, that we would take the lead, and match our speed to their cruising speed – which is a few tenths of a know slower than our natural speed.  We set up a communication schedule between the two boats for a radio call on the half hour on channel 13, a short range VHF channel.  We were having perfect conditions.  We did not even have to put the stabilizers on for several hours.

Around 14:00 a wall of fog rolled in cutting visibility to less than 200 meters, so we increased separation between the two boats to between 1 to 2 nautical miles (NM).  This was a grand passage, other than the fog.  Every hour, on the half, we chatted with Adventure, sometimes the conversations lasting until it was time to do the engine rooms checks at the top of each hour.  Then just as it showed up, around 19:30, the fog lifted like a sheet.  Poof, it was gone and we were going to experience a beautiful sunset.  This picture shows the last several minutes of the set.  It takes much longer to actually drop below the horizon up here.  I thought it was going to stay like that – it may further north.  There was no green flash. 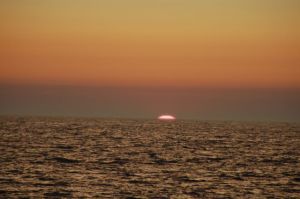 What was really amazing was how much of the passage we had internet, TV and phone communications.  As we approached NF, we were 25 miles off shore and having great internet.  Yes, we can live without connection for at least 24 hours – LOL.

The majesty of the NF coast is impossible to describe.  All I can say is that to me this is one of the motivations for cruising.  Approaching a new coast creates such a great appreciation for all that our time on this planet has to offer.  Space travelers must experience these emotions exponentially.  Here are a couple of pictures of the coast, which due to this photographer’s limitation, only hints at the grandeur of NF. Sunrise came early around 04:00 ATL, 04:30 local.  NF is one of the few places that has a change in time of only 30 min.  It was perfect and somewhat blinding as we were heading right for her.

For several hours now, a local fishing trawler, Newfoundland Storm, (NS) has been closing on our Starboard quarter.  He was within a ½ NM of projected crossing, but we were about to alter course 30 degrees to Stbd, which would have him close within couple hundred meters.  As a courtesy, I gave him a call on the VHF.  He was very appreciative of our professional approach and we (Brad on Adventure) and I ended up in an hour long conversation with Dan.  While I must admit that at times we struggled to completely understand Dan, we had a grand time.  This culminated in the most amazing fish catch of all our cruising experiences.  At the end of our conversation Dan asked us if we enjoyed fish?  With both Brad and Bradley answering in the affirmative, he proudly announced “Great I’ll make you a delivery”.  Now, Brad starts to worry a little, as to how we would get close enough to pass off some fish, as NS has his outriggers extended. (See picture below).   Of course the wily old salt was well ahead of us.  He announced he was going to pass us, cross our bow and drop a bag of fish on a float and we were to pick it up.  Good thing we had just recently practiced our man overboard drills! He dropped the package, Kathy spotted the float, and Bradley moved SM into position so Kathy could reach our dinner with the boat hook.  What a catch!  Dan had so very kindly prepared many beautiful fillets, and a cleaned whole fish.  (To see some of our other great fish catch experiences click here and scroll down and here) 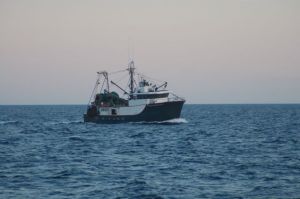 Newfoundland Storm about to drop off our fish

With dinner planned onboard Shear Madness, it was decided we would tuck into Bay of Islands at either Lark Harbour – which is known as the creator of the fastest SW winds in North America – or York Harbour.  As we came past Lark, it was clear that there was too much wind for that anchorage.  So we proceeded to York Harbour where we were able to tuck up close to shore at Broom Bottom Cove.  With winds blowing in the mid-30’s, Brad was a little concerned with Bradley’s choice.  However, shortly after we arrived, the winds begin dropping slowing and by dinner time were 18 to 22 and still dropping.  When we woke on Sunday morning, it was dead calm.

One very famous definition of cruising is traveling to remote places so you can fix what went wrong.  As fate would have it, Adventure ended up with some water maker problems, so Bradley went over to help.  While I was not successful at fixing the problem, I did remember that the Famous Steve Theus of Parker Hannifan, the Corporate owners of Village Marine water makers, included his cell number in his emails.  (He is a regular blogger on the Nordhavn owners site helping to solve water maker challenges.)  Sure enough Steve was available on a Saturday and was able to help Brad bypass the problem until a part can be secured.  Thanks Steve for all you do.

At 18:30, Brad and Lorraine arrived at SM, smiling as their water maker was operating again.  They brought some wonderful baked sweet potatoes, roasted brussel sprouts prepared to perfection, and an outstanding bottle of wine.  To that we added our fresh catch breaded and baked served with our famous Wasabi Mayo spread and a stupendous salad.  A wonderful evening was had by all.  Given we had just completed a 36 hour passage, we did not make it to the planned movie part of our evening program.  Everyone was sound asleep before 22:00.

As mentioned above, we woke to perfectly calm conditions and decided to pull the anchor early and head for our rendezvous with Migration at Norris Point in Bonne Bay.  Just before departing, a local boat came by for a visit and we met Austin, Caroline, and their dog Chopper who live in Corner Brook but have a little cabin here. They provided some good local information and we have their contact infor for next time we pass this way. Brad & Lorraine very kindly offered to use their tender to do a professional photo shoot of SM.  Below is our best shot of Adventure and their best shot of SM.  They provided us with over 400 incredible pictures of SM, many of which are keepers.

Adventure underway with a full moon (photo by Bradley!)

Adventure had decided to stay in the Bay of Islands for a few days of exploring, so we said our goodbyes and parted ways, expecting to catch up with them back in the states in Oct. or Nov.  Creating new friendships based on shared experiences is another reason we love cruising.

Soon we will be heading to even more remote areas. You can track our progress here with data provided by our Spot satellite tracking device.

Adventure passing through bridge to exit the Bras d’Or Lakes 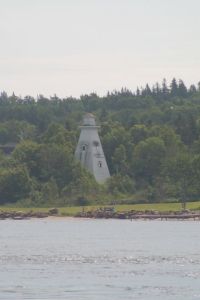 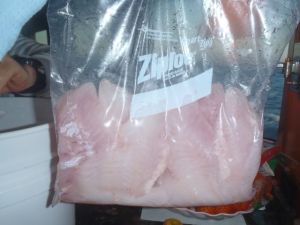 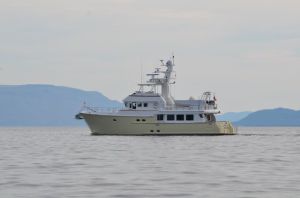 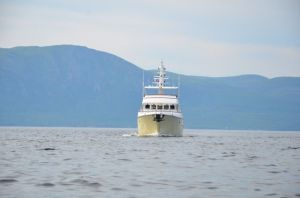 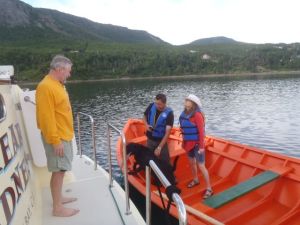 Austin, Caroline and Chopper come for a visit 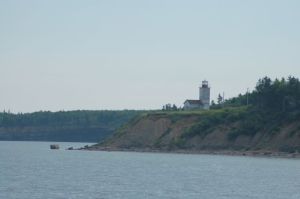 This entry was posted on July 16, 2014, 7:40 am and is filed under Trips. You can follow any responses to this entry through RSS 2.0. You can leave a response, or trackback from your own site.