Northern Labrador is very sparsely populated with only a few small coastal villages made up largely of people of Inuit heritage. There is no overland road system and delivery of supplies and transportation between villages is dependent on supply ships which double as ferries. The good news about that is that these small villages have large, well-maintained public docks which are available for visitors to tie up to.

Kathy and Marci in Makkovik

At this point in our journey, we are traveling only by day so that we can maintain a constant visual watch. The large icebergs show up nicely on radar – the photo included here shows nearly 20 icebergs within 12 miles on our radar display (there are also some islands which show up on the lower left side). When a target shows up in close proximity on radar, we confirm its location visually. And when we see something visually, we confirm its location on radar. There are, however, many small pieces of ice, called “growlers” or “bergy bits” that do not register on the radar because they do not rise much above the water level. These are the more dangerous threat as they may be large enough to cause damage to stabilizers or to leave some nice dings in the bottom paint. We have diverted course a few times in order to view some of the more photogenic icebergs up close. I have posted a video slide show of our favorites bergs here. 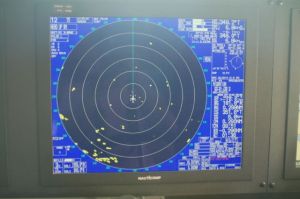 As we continued to work our way north, our next anchorage was at Curlew Harbor where we again enjoyed a Labrador-style hike, finding our own way up to a summit with spectacular views. We then continued on for a short hop to the town of Cartwright, where we were able to tie up to public wharfs. We explored the town, which is the last coastal town connected by roads so there are some cars and trucks mixed in with many all-terrain vehicles. Bradley headed off for a bike ride while George, Marci, and I went for a walk. We visited the local pub, which had internet access so we were able to retrieve our emails. None of these coastal towns has cell service, so our onboard communications are limited to satellite phone and our ability to get emails depends on finding a shore-based internet connection. The people here are curious and friendly but our stay was short – just an overnight. Then it was time to move on with a 6am departure , this time an 87 nautical mile run to an anchorage at Holton Harbour, enjoying many beautiful icebergs along the way. We anchored for the night and headed over to Migration for a wonderful dinner where we watched a heavy fog settle in, making Shear Madness look like a ghost ship.

Shear Madness in the fog

We were up early again for another 82 NM trip in to Makkovik in very pleasant conditions. Along the way we had a chat on the radio with Astron, one of the two intra-provincial ferries that delivers supplies and passengers from Newfoundland to North Labrador towns. The captain was quite friendly, explaining their routes, what they carry, and answering many of our questions. The ferries generally run from June through December, depending on the ice and each town is visited once a week by either Astron or Northern Ranger. Our pleasant weather lasted right up until it was time to tie up at the very nice commercial dock. A front decided to pass through, bring with it driving rain and 30 knot winds. It made the docking a bit more exciting than we would have liked but we were soon safely docked. We stayed on board for the night, hanging our sodden clothes in the engine room to dry and warming ourselves with some hot turkey soup.

In the morning we set off to explore Makkovik and had a great time. We visited the local store which was well stocked and picked up some fresh milk and more eggs. We met a few locals who were very friendly and helpful and visited the local radio station where we met Velma, the DJ and her son Preston. Marci and I went for a hike along the “Poet’s Path”, a nice trail where short poems, some written by residents and others by well-known authors, are mounted on trees. We stopped to read each one, greatly enjoying it and hampered only by the pesky mosquitoes! Reaching the end of the Poet’s Path, we continued on, traveling a beautiful, long boardwalk that led to the seashore. Here we encounter a local couple fishing for Artic Char, but they had not had a catch yet. From there, we continued up a rocky hill for some spectacular views, then headed down the hill to the local museum. Here we found a note saying that if Myrtle was not at the museum, we should go find her at the church next door. We found her with no problem and she came back to give us a tour of the museum – a small house filled with many old photos showing the history of the town.

Plenty of Goldens, but no Labs so far

Then it was back to the docks where the Northern Ranger was due to arrive at 6pm and there she was, right on schedule! She tied up on the other side of the same dock we were on and at more than 150 feet in length and very tall, we looked quit small indeed. During her three hour stop, she unloaded many supplies – a washing machine, a snowmobile, lots of logs to be used for firewood, supplies for the local stores, packages for residents, and much more. Passengers also disembarked while others got on to head to the next stop. Bradley chatted with the Captain and Engineer while the unloading was going on.

Bradley had also become friendly with a local fishing boat who had just come in from six days with a catch of 43,000 pounds of snow crab. The Captain offered him “a few crabs” which he said he would deliver later after the catch was unloaded at the local processing plant. Later that evening, after Northern Ranger had left to continue north, we saw a forklift with a large crate coming down the dock. It was our snow crabs! It was enough to fill an entire cooler and we kept them on ice with plans for a feast the next day.

From Makkovik, it was a 50 mile trip to our next stop, Hopedale. We got underway at 4am and arrived at 1:30pm. Although this is a ferry stop, the dock here is designed for the ferry to tie stern-to (ie, backed up) to a small dock. The public wharf in town looked very unappealing, so we decided to anchor out. George launched his tender and we explored the town, where George and Marci delivered a package to a local resident from a cruising friend they had met in Maine. That friend had spent many years running charter boat tours in Labrador and Greenland and had made many friends along the way. She had given George and Marci several packages to drop off along the way and has been a great source of information for us in planning this trip. 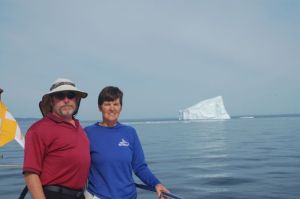 Bradley and Kathy at the iceberg

As we passed the local fire station, a crowd was gathering. They were getting ready for the “Fireman’s Challenge”, a series of events where residents of various ages compete. We stayed long enough to watch the first event, then headed off to hike up to the old US Air Force station atop a large hill. Again, we were treated to spectacular views. From there, it was back to Shear Madness for a Surf and Turf Feast, with George and Marci bringing some steaks to go with the snow crabs. We had two pots going to cook the crabs and we had plenty for all five of us to eat our fill, plus a whole lot more left in the fridge!

So far we have seen many dogs – golden retrievers, huskies and malamutes, border collies, lots of mixed breeds, even a terrier – but we have yet to see a single Lab! Our stay in Hopedale was short as we are now focused on getting further north so that we can plan our crossing to Greenland. We are now en route to Nain, the last town we will encounter as we proceed north to the Tongrat National Park and beyond.

Lots of icebergs out there 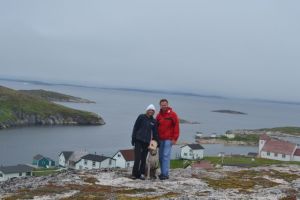 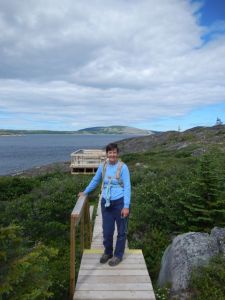 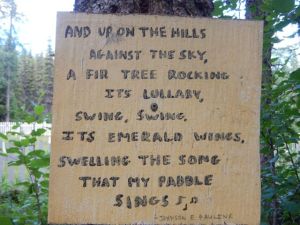 On the Poet’s Path

At the docks in Makkovik 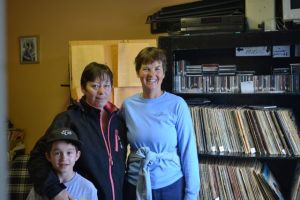 Kathy with Velma and Preston at CIML Radio 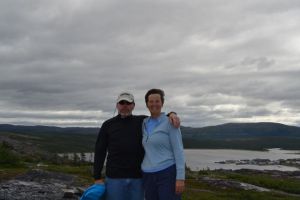 Bradley and Kathy in Makkovik 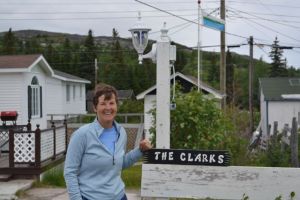 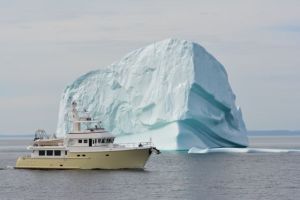 Shear Madness close to a berg

Kathy gets some love from Gulliver

Kathy on Migration with ghost ship Shear Madness in background 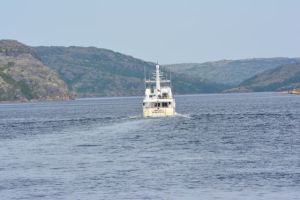 Our iceberg up close

Migration and the iceberg 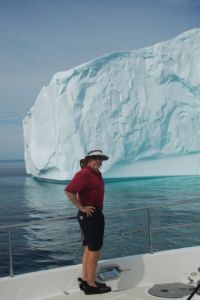 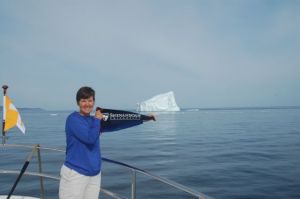 This entry was posted on July 27, 2014, 10:54 am and is filed under Trips. You can follow any responses to this entry through RSS 2.0. You can leave a response, or trackback from your own site.