We arrived back in Aasiaat with no problems and found space at the dock for Migration to tie up. Soon we were rafted up beside her with two fishing boats rafted up facing Migration’s stern. After a quiet evening we woke to find workers on one of the fishing boats using a grinder and sending steel dust flying our way. Wanting to avoid this as much as possible, we decided to move back to create some space between us and the fishing boats. While keeping Shear Madness secured to Migration, we eased Migration’s lines while George maneuvered her to her new location, a safe distance from the fishing boats. 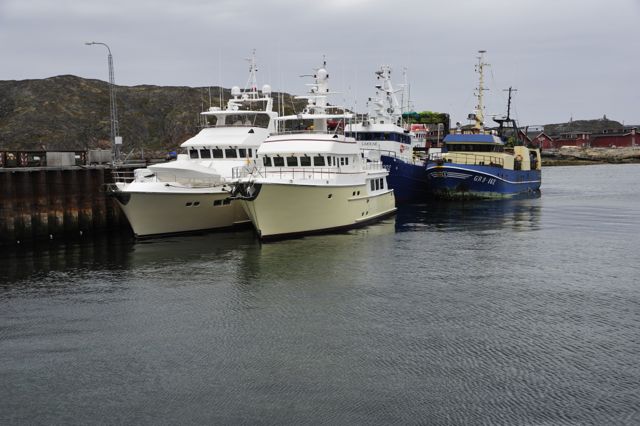 Steve arrived on schedule and after he had settled in, we decided to visit the one restaurant in town, which turned out to be very nice. It is run by a couple, a Danish man and his Thai wife, and serves a combination of standard and Thai dishes. Though there were some small communications problems, we enjoyed our meal. Seated nearby was a group of men who we struck up a conversation with. They were from a large tugboat, the Tandberg Polar and they had quite an interesting story. They were from Norway and were on their way to Labrador to salvage a boat called Maude, one of Raoul Amundsen’s vessels that was lost many years ago. The tug is pulling a large barge, which will be used to raise the Maude over the next month. Then it will sit for the winter before being towed back to Greenland next summer and then on to Norway the following year where it will be restored. Details are available at http://www.maudreturnshome.no.

We returned from dinner planning to get a good night’s sleep before departing for Christianshab (Qasigiannguit) in the morning. But we were all awakened at 1:30 in the morning by a ferry that arrived and was trying to dock in front of Migration. Because we had moved our boats, there was not quite enough room for the ferry to fit at the dock, so he decided to get our attention by undoing one of Migration’s docking lines and throwing it on board. If that wasn’t enough, he then decided to bang his anchor into Migration’s, ensuring that everyone was soon awake and on deck. We needed to move the boats back to their original spot. The only problem was that it was now very cold with a nasty wind blowing. And it was also during the short 2-hours of darkness! But it wasn’t long before we were moved the short distance that allowed the ferry to fit and everyone was back in bed.

Bradley gets a puppy kiss – with lots of tongue! (photo by Steve D’Antonio)

The next morning Bradley and I accompanied Steve for a walk around town. Steve is a serious photographer and took many great photos which he will be posting on his website. From there, it was an easy day trip to Christianshab, a lovely town just south of Ilulissat where we found plenty of room to anchor. We spent two great days there, with some spectacular day hikes offering fabulous views. We also took the tender out to see some icebergs up close, taking Gulliver along. It is amazing to not only see, but to hear the icebergs. The have their own landscape, with waterfalls, blue streaks where ice has melted and re-frozen without air, grooves, hills, nooks and crannies – and many different sounds. The water is very clear and deep here, enabling a great view of the bergs below the surface. Here you see bubbles rising up as air continually escapes, with occasional chunks of ice rising to the surface. Care must be taken when getting so close, as icebergs are not exactly stable – they can overturn, collapse, calve, or move at any time. This becomes very clear when you are close enough to hear the sounds and see the various features – a constant bonanza of sights and sounds.

Gulliver off to see some bergs (photo by Steve D’Antonio)

Christianschab is a lovely town, seemingly with as many sled dogs as people. These dogs are generally kept just outside of town in small groups. The dogs are kept chained in close proximity to others in their group – these are working dogs, and are well-fed and cared for. They are not pets, though the puppies are allowed to wander free and are cute and playful, just like any other puppies. The adults are beautiful – watchful, intelligent, and proud. The only downside to being here in the summer is not being able to see them in action!

Back at the town dock, we observed several locals preparing to head out in small boats to hunt seals. We watched them dress in wetsuits plus several layers of clothing – it gets very chilly out on the water! We saw several families, with small children sitting next to the rifles as they headed out with big smiles on their faces. Several locals came by offering for sale walrus skulls with tusks, narwhal tusks, and other interesting items – none of which we wanted to buy but all of which were interesting to look at! 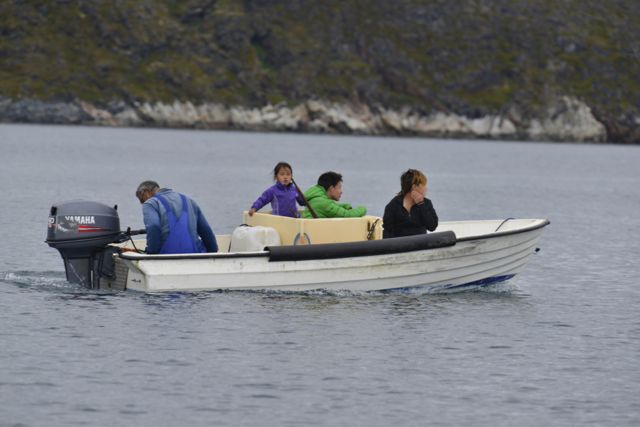 QQAll of this is a reminder of the very different life of these amazing Greenlanders. For centuries they have lived quite successfully in this harsh and unforgiving climate – having been here for a brief period of summer, we cannot even begin to imagine what it would be like in winter. But it makes us want to experience it – not by boat of course, but perhaps a trip back by air to experience some dogsledding or snowmobiling.

We have not seen a lot of cruising boats here, but in Christianshab, a sailboat named Kiwi Roa arrived at our anchorage and we stopped by to meet them. This boat is owned by Peter Smith, a New Zealander who was a long-time sailboat racer and boat builder and who is the designer of the very popular Rocna anchor, the type that Migration uses. We enjoyed drinks aboard Shear Madness with Peter and his partner Marlise.

Next it was off to Rodebay (Oqaatsut), 35 miles north from where we hope to launch another attempt to get into Ilulissat.

Shear Madness at wharf in Aasiaat (photo by Steve D’Antonio) 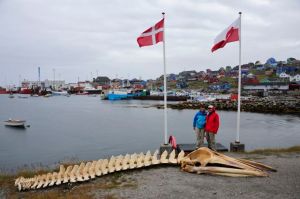 Bradley and Kathy in Aasiaat (photo by Steve D’Antonio) 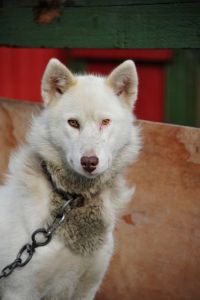 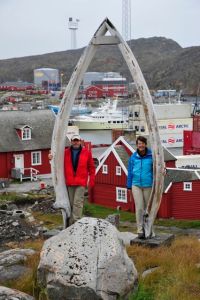 Dogsleds have right of way (photo by Steve D’Antonio) 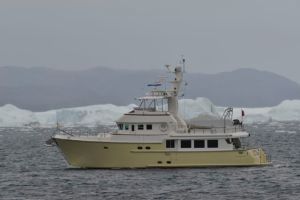 Out for an iceberg tour (photo by Steve D’Antonio) 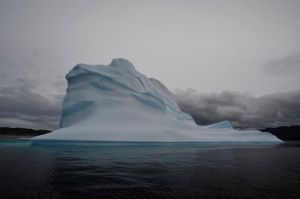 Up close (photo by Steve D’Antonio)

Anyone want to buy a walrus skull? (photo by Steve D’Antonio) 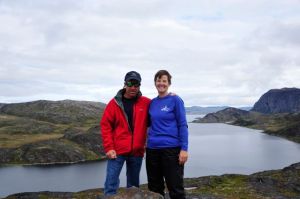 Steve and Kathy in Christianshab 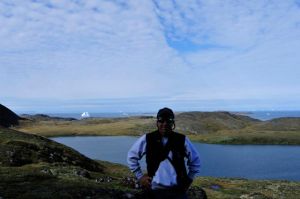 Kathy and Marci enjoy the view (photo by Steve D’Antonio) 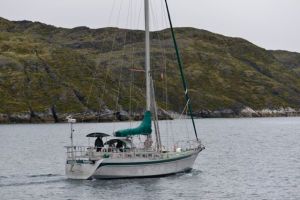 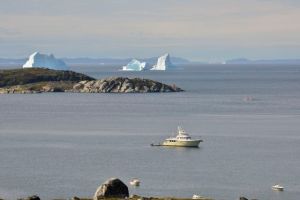 View from the hills (photo by Steve D’Antonio) 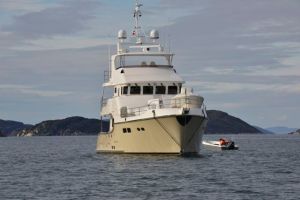 This entry was posted on August 21, 2014, 4:42 am and is filed under Trips. You can follow any responses to this entry through RSS 2.0. You can leave a response, or trackback from your own site.