(Note: we have a lot of material from our summer travels and will be publishing an update about once a week for the next few months until we catch up!).

Once clear of the ice maze departing from our anchorage in Rodebay, we settled in for a pleasant trip to Godhavn (Qeqertarsuaq) on Disko Island. Once a flourishing trading post in the late 18th century, Godhavn today is a fairly quiet place where the locals rely on fishing and hunting. The protected harbor is guarded by spectacular cliffs, lots of rocks around the entrance, and plenty of icebergs. We proceeded in cautiously after a full day trip that began with plenty of stressful navigation. All we needed to do was find a nice spot to anchor and drop the hook. 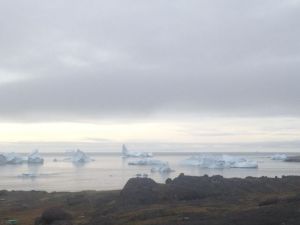 Icebergs dot the coast of Godhavn

As we rounded the corner it became apparent that this was not to be an easy task. The inner harbor was crowded with boats and moorings and the small dock used by ferries and cargo ships was not available, nor was it suitable for us – it was small and very rough. Finding a spot for both boats where we could safely anchor in comfortable depths took some doing. We both cruised slowly around, checking depths and distances from shore, until we settled on a potential spot. It was not ideal, as it meant we would be on the path of any boats coming or going, but it was the only possible spot we could safely anchor. On our first try, the anchor didn’t hold and we were also way too close to a mooring ball, so we had to try again. Finally, on the third try, we got a reasonable set of the anchor and breathed a big sigh of relief as Migration also settled in. We were happy to relax over a wonderful dinner onboard Migration.

There were several small icebergs that had made their way into the harbor and we awoke in the morning to a strange sight. We noticed a small boat moving very slowly through the harbor. It appeared to be towing something but it took us a few seconds to understand what we were seeing. It was towing an iceberg! Apparently that’s how they get them out of the harbor – a line is fastened around the berg and a boat tows it far enough away for it to be carried out on the currents. We would also have need to use our “ice pole” for the first time here. In preparing for this trip, George suggested we have the poles, longer than a standard boat hook, which can be used to push ice away from your boat. We had each purchased telescoping light bulb changer poles from Home Depot and George had adapted them to be used for this purpose. In Godhavn, we had a fair size mini-berg that seemed intent on drifting into us. Bradley deployed the ice pole and with a bit of effort successfully steered it away from the boat – or was it the boat away from the ice?

Towing an iceberg out of the harbor in Godhavn

Godhavn has some wonderful hiking and we were anxious to get out to see the sights, but the weather was not cooperative. Overcast skies gave way to rain and fog, so we climbed only a short distance our first day before returning to town. Again, there were plenty of sled dogs biding their time until their work begins in the next few months.

Sadly, this was to be a bittersweet night. It was time for us to part company with Migration as they were planning to leave in the morning to begin their journey southwest down the Greenland coast to position for their crossing to Europe. Their plan is being complicated by the threat of a volcanic eruption in Iceland, so they will be keeping a close eye on that and some very bad weather developing on the West coast of Greenland. Meanwhile, we will spend a day or so here before heading back to Aasiaat to prepare for our crossing back across the Davis Strait to Canada.

Shear Madness and Migration in Godhavn – we will miss our buddy boat!

Though we have loosely cruised with other boats for short periods, this was our first experience spending a whole season in close company with another boat. We could not have asked for a better experience as George, Marci, and of course Capt. Gulliver turned out to be the perfect traveling companions (well, almost perfect – George doesn’t like avocados, mushrooms, or brussel sprouts) and the boats are of course well matched. I don’t think we would have considered a trip this extreme without the added confidence of doing it with such capable and fun companions. And with the dearth of other cruisers here, it was great to alternate dinners, share photos, and in general get to know each other. I’m sure we will look for a future adventure to share together, but for now we are missing our buddy boat!

On our own, the next day we had time for a final hike, but again were constrained by rain and fog. We walked along the coastal trail, up some hills that gave us some views of some beautiful waterfalls and many of the icebergs just offshore. However, the fog was thickening so we had to cut our hike short and return to town. The next day it was time to set off for Aasiaat, a nice day trip. There were plenty of icebergs as we departed, but soon enough we were in clear water with only the occasional large berg to avoid. Fortunately, upon our arrival in Aasiaat, the dock was empty so we tied up to wait for good weather to cross the Davis Strait. We did a bit more hiking around town and found plenty more dogs and lots of puppies to play with – puppies are allowed to wander free until they are grown and they enjoy attention. We once again were immersed in fog and rain! But we were lucky – the weather was looking good for a departure on Monday, August 25. Our destination is Baffin Island, making for the shortest crossing across the Strait, where we plan to find a comfortable anchorage and begin working our way south back to Labrador, then to Newfoundland and Nova Scotia before returning to the US 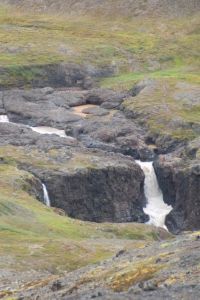 Waterfall on our hike 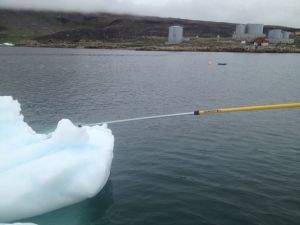 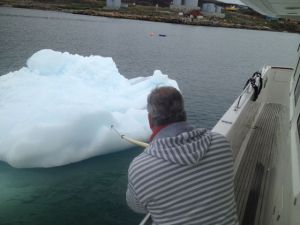 Either the iceberg or the boat moved! 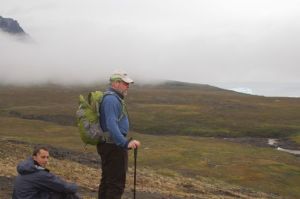 Bradley and Matt enjoy the view 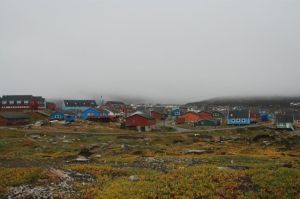 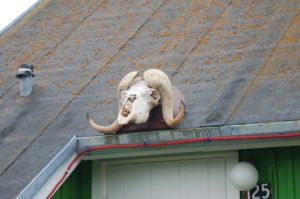 No, they aren’t attacking him – just running along

Yes, this is what Greenland is all about!

Godhavn and icebergs seen from our hike 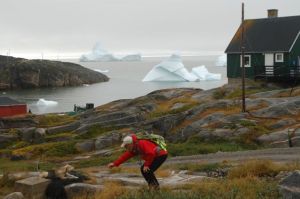 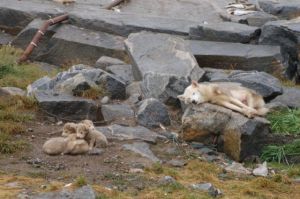 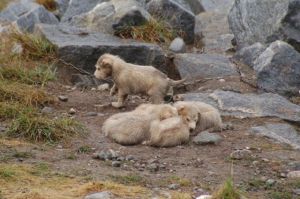 Getting the last puppy hugs in Greenland

This entry was posted on September 12, 2014, 5:20 am and is filed under Trips. You can follow any responses to this entry through RSS 2.0. You can leave a response, or trackback from your own site.