After a wonderful day of exploring and seeing a polar bear up close at Williams Harbour, we had a day of miserable weather – cold, rain, and wind – that kept us inside watching movies and lazing around. The following day was better but not great, but we were determined to do some more exploring. So we bundled up and set off for an hour long tender ride to the Ikkudliayuk Fjord where we hoped to see some great scenery and possibly more bears. We were not to be disappointed!

View of the fjord

Majestic, impressive, intimidating, harsh, stark, beautiful – these are all words that come to mind as we progress. We are in the part of Labrador which has the highest cliffs and combined with the long and very deep fjords, it makes for just a magnificent setting. As we entered the Ikkudliayuk fjord, it wasn’t long before we spotted a polar bear. We slowed for a look through binoculars at a bear well up on the cliffs, making his way quite easily along the rocky ledges. Seeing these magnificent animals in person is truly amazing!

As we continued, we spotted another, then another! Seems like we had indeed found a great place to see polar bears! A light rain had begun and it looked like it might get worse, so we decided to put up the bimini top (convertible roof) on the tender for some protection. It’s not difficult, but requires two people and a bit of coordination and a few minutes to get everything in place. With the engines in neutral and the tender drifting, Matt and Bradley began the process while I spotted another bear on shore. As I watched, he decided to go for a swim and soon was in the water not too far from us and coming closer. I watched the bear as Bradley and Matt continued to raise the bimini. They ran into a bit of a problem as one of the pins that secures it in place decided to break, necessitating a temporary fix. As we drifted along with Bradley and Matt occupied with getting the top secure, the bears path brought it closer and closer. Although he didn’t seem to be heading directly towards us, he was certainly going to pass not far off. Finally, the bimini was in place and we resumed our course, with a great view of our swimming bear as he continued on past us.

We wanted to go for a hike but had now spotted four polar bears since entering the fjord. Though they seemed a bit skittish of the tender with its engines running, it may be a different story if we were on land. So we had a good discussion about whether we should go ashore and finally concluded we would give it a try. Though we do not have a gun, we had come prepared with a loud air horn, bear spray, hand held flares, a flare gun, knife, and hiking pole. We have watched the video on how to handle a confrontation with a polar bear and, though we hoped we would not encounter one, felt that it was an acceptable risk. We found a great place to tie the tender and go ashore near a place that would allow us to walk on mostly open terrain with good visibility so that we would not sneak up on anything or vice versa.

We hiked for a couple of hours, climbing gently with remarkable views. We saw signs of wildlife, especially caribou scat and prints, plus a very old skin from a seal well up on land and some very old looking bear scat. We stuck very close together and were on high alert throughout the hike, but fortunately no live polar bears were encountered. We returned to the tender and found that the place we had left it appeared to have been used in the past as a hunting camp. We found many bones, probably of seals and possibly even polar bears, plus a skull that appeared to be a dog. Just as we boarded the tender, we spotted a bear off in the distance, on a small island. We again were thankful we had not encountered one on land!

As we began our trip back to the boat, we spotted a bear swimming not far off and decided to try for a closer look. We eased past the bear, who seemed unconcerned with us and watched him swim at more than 8 knots as we kept pace. We saw him occasionally put his head under water as if he were looking for something. Then he would raise his head and look around, swim a bit, and poke it back under the water. He eventually headed towards the shore and we watched as he got out, shook himself off, and set off over the rocks and boulders.

We had been gone for six hours and the wind was picking up as we began the long tender ride back to the boat. We spotted one more bear on shore and then as we exited the fjord and headed back to our anchorage, the winds really kicked up, creating a very chilly and wet ride! In the open water, we saw our final bear of the day, swimming and apparently hunting. He would occasionally dive underwater, head first, just as Bradley does when spearfishing. At first we thought he was trying to hide from us, but we slowed and watched and it looked as if he were hunting. But as the weather was getting worse and we still had a long way to go, we did not linger to watch but high-tailed it back to the boat. That brought our polar bear sighting count to 14 so far!

Although we were tired from a long day, we were also concerned about the winds, which were coming from the West, the only direction for which our anchorage offered no protection! So we decided to move to a better anchorage for the night, an hour away. It was a good decision, as once there, we were very comfortable as the winds kicked up to over 40 knots. Nevertheless, we got a good night’s sleep and we ready to head south in the morning. 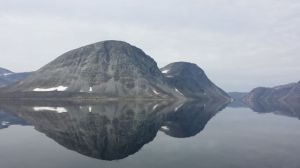 Beautiful and calm – before the winds picked up! 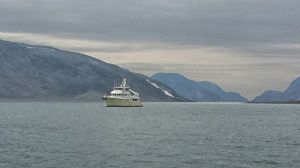 At anchor in Williams Harbour, Labdrador

First bear of the day 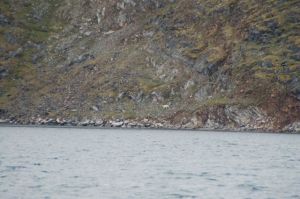 Second bear of the day 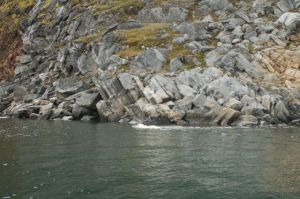 Head under water – looking for seals?? 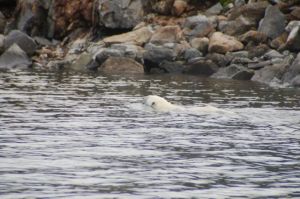 Looking for a place to get ashore

Out of the water

Traveling quickly over the boulders 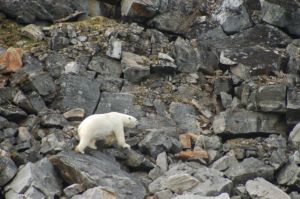 And on he goes 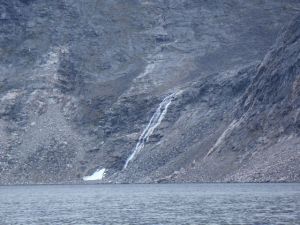 A cold ride back

This entry was posted on October 2, 2014, 11:30 am and is filed under Trips. You can follow any responses to this entry through RSS 2.0. You can leave a response, or trackback from your own site.