As September approached, it was time to begin our journey south down the coast of Labrador. On Sept 1 we departed our anchorage in Williams Bay at 5:45am to head towards Nain, the northernmost town in Labrador but still a 36 hour trip for us. The base camp at Torngat Park, between our anchorage and Nain, closes down on August 31st, so there was no reason to stop in there on the way. At 10:00am we spotted 3 more polars bears on shore, bringing our total bear spottings to 18! These would be the last we would see. We did, however, continue to see some icebergs – not a lot, but enough to keep us on our toes. We did encounter one large one which had recently calved, creating lots of smaller growlers we had to avoid.

Gary from Parks Canada comes aboard for a visit

Conditions for this leg were ideal with calm seas and beautiful clear nights. We approached Mugford Tickle, a very narrow passage, during the night. But we had a good track line from when we had come through it on our way north in July and it was a very clear night, so we proceeded through with no problem. Despite being very narrow, with shear cliffs on either side, the water is actually very deep – several hundred feet!

At 10:00am on September 2nd, our log notes “spotted trees for the first time since July 27th”! Our latitude for that log entry was 57.13.9 and for the past six weeks we had seen only moss and small bushes – the environment is too harsh for trees to grow. As we approached Nain, we encountered a 2 knot current against us, bringing our boat speed down below 6 knots. But we arrived in Nain and docked at the large commercial wharf with no problems.

We visited the Parks Canada office and met with Judy who we had met on our previous visit to Nain and also Gary, the Parks Canada manager for the Torngat Base Camp, who we had met during our stop there in July. We met with them to brainstorm on some ideas about promoting the park as a great destination for cruising boats and hope that more cruisers will visit Torngat in the future. We also invited Gary aboard Shear Madness where we enjoyed a chance to relax and catch up. 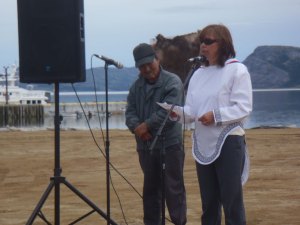 Sarah Leo, President of Nunatsiavut, speaks at the groundbreaking

In Nain, there was a groundbreaking ceremony for Illusuak, the new Inuit Cultural Center that is due to open in 2016. Nain is in a part of Labrador known as Nunatsiavut, which means “our beautiful land” and was created under a land claim agreement with the Inuit. It has its own government “to represent the residents of the land claim area and any Labrador Inuit living elsewhere in Canada. Nunatsiavut remained a part of Newfoundland and Labrador, but the Government of Nunatsiavut acquired the jurisdictional authority over health, education, and justice in the land claim area. Nunatsiavut operates under a consensus government within the parliamentary system of Canada.”

We attended the groundbreaking, where there were several speakers including the President of Nunatsiavut. We spoke to many locals at the well-attended event and enjoyed learning more about the Inuit culture. It seems that there is a resurgence of interest among the younger generation, with many young people learning the native language and customs. For us, there is a bit of a conundrum. We are in favor of preserving the culture, but there seems to be a lot of unwise spending going on with funds from various governments and trusts. For example, in Makkovik, a town of 360 people with no roads connecting it to any other town, they are building a $12 million ice arena. I’m sure it will be a nice facility, but really, is that the best use of that kind of money?

Reg and his dogs in Makkovik

After our one-day stop in Nain, we continued on to Makkovik, departing on Sept 4th with an overnight stop at an anchorage near Hopedale before heading into the Makkovik town dock on Sept 5th. Here we would wait a couple days for some bad weather to pass. On a trip to the grocery store, I encountered a friendly man who struck up a conversation. He seemed vaguely familiar and we soon discovered we had met on our stop here in July. His name is Reg and he has two golden retrievers – we had stopped and talked to him while exploring the town. Reg offered me a ride back to the boat as it was now raining. First we stopped by his house to drop off his groceries and to check on the seal he was cooking! And yes, he did share his seal meat with us. It was interesting – a very strong flavor, very gamey but would be good with plenty of mashed potatoes! I gave Reg a tour of the boat and we exchanged contact information. He and his wife run a small bed and breakfast in their home so can provide accommodations for anyone wanting to visit Makkovik.

Once the weather passed, we were ready to continue on, destined next for Port Au Choix, Newfoundland. As for Labrador, it was simply a magical place. It is a vast, enchanting, scary, interesting, amazing place. Our only regret is that we had so much ground to cover in order to get to Greenland that we did not get to spend nearly enough time there. Thus, we are thinking of devoting the summer of 2016 to cruising Labrador at a more leisurely pace. Anyone looking for a great adventure, please let us know! We’d love to have other boats and/or guests join us! 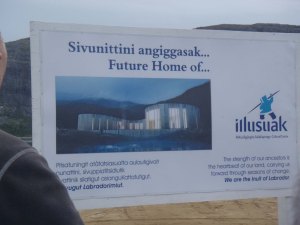 A good crowd at the groundbreaking 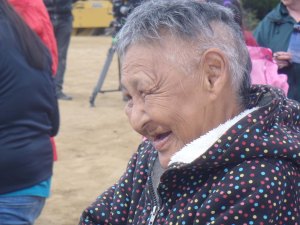 The Inuit translator speaks with Shear Madness in the background 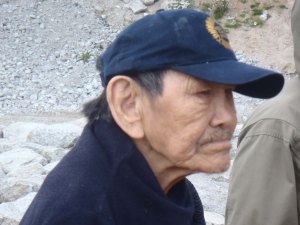 A local man watches the ceremony 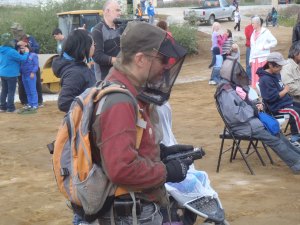 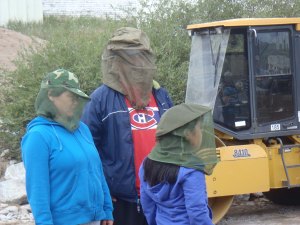 Fashion for the whole family 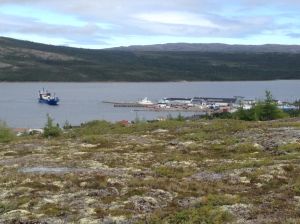 Shear Madness in Makkovik with the Northern Ranger approaching

This entry was posted on November 9, 2014, 9:33 am and is filed under Trips. You can follow any responses to this entry through RSS 2.0. You can leave a response, or trackback from your own site.