Before we get into more technical stuff, here’s a great video from last summer in Labrador. One of our cruising partners had a quad-copter drone which he could launch and retrieve from his boat and this video has some great aerial shots of the boats and icebergs. Sadly the drone is not amphibious.

Now for more on our maintenance. This update will cover all the electrical projects we have completed. We worked with the crew at Offshore Marine Electronics – Steve, Clayton, Buddy, Fran, Scott, Beth, and Sue who, after working on lightning strike repairs and other projects over the past few years, are now like family. The next updates will cover engine work and interior upgrades.

We are approaching the end of the maintenance cycle and plan to launch the boat this week. Ready to get back to cruising!

Buddy tightens connections in power board 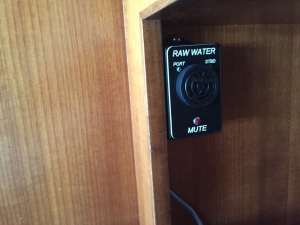 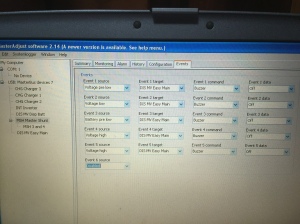 Alarms on our Mastervolt system

Settings for our Mastervolt Shiunt 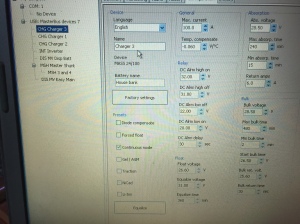 Settings for our Mastervolt Chargers

This entry was posted on May 3, 2015, 7:07 am and is filed under Trips. You can follow any responses to this entry through RSS 2.0. You can leave a response, or trackback from your own site.