We were all fueled up and ready to go. Our first destination is Charleston, SC. This is a trip of just over 200 miles and will allow us to thoroughly test everything to be sure we are ready for longer range cruising. We have some good friends in Charleston we want to visit and it will be a good departure location for a run to the Bahamas. Warm water, here we come!

The day before we departed from Portside Marina in Morehead City, a small American Cruise Line ship arrived and docked across from us. It made for a nice photo opp!

We departed the marina late afternoon headed for anchor at Cape Lookout, a short trip to allow us a bit of time to relax and prepare for the passage to Charleston. Once anchored there we launched our inflatable paddle board and Bradley and I took turns paddling ashore, hiking, and swimming. After two pleasant nights at anchor, the weather looked perfect. We departed in the dark at 4am and were soon underway. Joining us on this passage is our new crew member, Richard, who joined us in Jarrett Bay and will be cruising with us for awhile.

Conditions offshore were ideal with calm seas and light winds. We opened up the flybridge and put out a couple fishing lines. It wasn’t long before we spotted some dolphins coming to play – always one of our favorite parts of a passage. Once they were gone it wasn’t long before we heard the zzzzzzing of the fishing line! Bradley took control of the reel while I slowed the boat by backing off to idle speed with a single engine. Slowing to 3 knots allowed him to land a beautiful mahi-mahi, which was soon filleted and in the fridge. The lines were put back out and soon it was Richard’s turn to reel in another nice mahi-mahi, a bit smaller but weighing 10 pounds and making a few good meals.

After another nice dolphin show, a beautiful sunset, and a great night underway, we approached Charleston Harbor and anchored near the St. James Yacht Club. We launched the tender and went to pick up some friends of Richard’s who were there to greet us. Sandy, Lanny, and Wendy came aboard for a brief visit, then we had a nice breakfast and naps. We returned ashore for some exercise, then enjoyed a nice fresh fish dinner, picking up our friends Fletcher and his wife Jetti from nearby Ashley Marina. We had a great evening with them. With the strong currents in the area and the winds picking up, we decided to move the next day to an anchorage up the Wando River near Daniel Island. Here, we visited with some good friends, Liz and Brown and their kids. We picked up Brown and the kids and brought them to the boat for some tubing, swimming, and diving and had a great time. Later we went to their house for a wonderful dinner.

From there we headed in to the Ashley Marina, timing our arrival for 7 pm during slack water – the period between tidal shifts when the current is minimal. The current in the Ashley River is very brisk and it can be great entertainment watching boats that try to arrive or depart during its height! At slack water, we had no problems docking and were soon secure. We ended up docked directly behind Fletcher and Jetti’s classic Hatteras yacht.

Bradley and I headed off for the local famer’s market. It was Sunday and the market, usually open only on Saturday, was open because of the Spoleto Festival taking place in the city for the week. This is a festival of many activities, including art, shows, and various entertainment, some free and some not. We picked up a few things at the market, and I met an artist by the name of Kathy Clark!

My namesake at the Farmer’s Market

We met another Nordhavn couple, Kristin and Wayne who were also at the Ashley Marina. They have been email friends so it was great to meet them in person. We planned to do dinner and a Spoleto Festival play about building an amusement park. The dinner at the Lebanese restaurant Leyla was fabulous – we cannot say the same about the play! At least the seats were comfortable enough for us all to enjoy a nap! I also trekked over to the Charleston City Docks – right next door to Ashley Marina but 3 miles round trip once you walk all the docks – and met Tom and Bonnie on the “other” Migration, a Nordhavn 47 (not to be confused with the 68-foot Migration who we cruised with last summer). It was great to put faces to names as again we only knew Tom and Bonnie online. 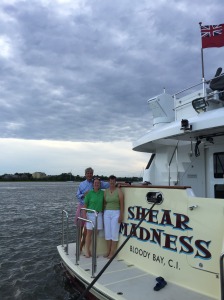 Fletcher and Jetti on Shear Madness

Friends from Beaufort, SC (pronounced BEW-fort as opposed to the NC town which is BOW-fort but spelled the same), Preston and Trish drove up to join us for dinner. First we had drinks aboard Fletcher and Jetti’s boat, then Kristin and Wayne joined us aboard Shear Madness to help with a 9-pound fresh ham roast we had bought at Nahunta Pork Center before departing NC. It was a fabulous night. I had not seen Preston in close to ten years, we had just met Wayne and Kristin, and they had never met Preston and Trish, yet it was like we had all known each other for years and were the best of friends. Preston and Trish stayed overnight and promised to come and visit us “out there” someday. All that remained was a quick run to Costco to stock up on fresh produce for the next few weeks!

The weather looked good for a departure early Wednesday, June 3 for a passage to The Abacos in the Bahamas! Slack water would be around 3:30am, so we had an early night, looking forward to the next leg of our summer cruising!

Here is a video of our passage followed by some more photos: 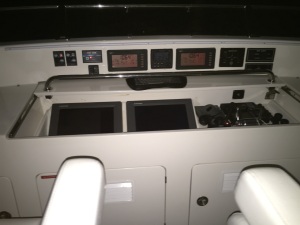 Bradley reels the first fish in

This will make a few nice dinners!

Richard takes on the second fish

Kayak and tender having a pleasant ride 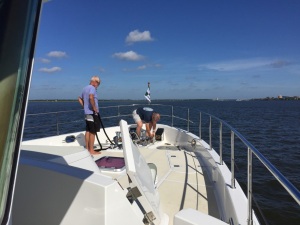 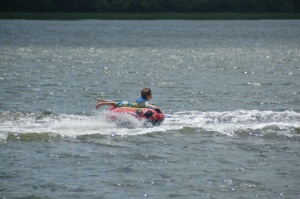 Calvin on a tube ride

Liesel takes a turn on the tube

Swimming in the Wando river

One last Costco run before heading to the Bahamas

Tom and Bonnie on the “other” Migration, a Nordhavn 47

This entry was posted on June 6, 2015, 7:46 am and is filed under Trips. You can follow any responses to this entry through RSS 2.0. You can leave a response, or trackback from your own site.