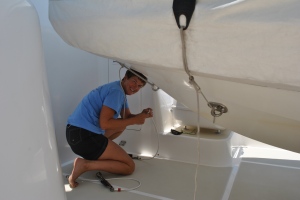 Kathy secures the tender with the cables from Naples

After arriving back at Old Port Cove Marina in Palm Beach, we completed the remaining repairs and finishing touches from the lightning strike (scroll to end for technical details). We then flew out to Colorado to attend a friend’s wedding and to visit some family, and then returned to begin our journey north. Our friends Bruce and Anne from Florida joined us for the trip to Charleston, SC then on to Beaufort, NC. Our plan was to sail to Charleston, a trip of about 360 miles which we estimated would take about 48 hours, then to continue on to Beaufort, another 200 miles. We wanted to spend the 4th of July in Charleston where we were last year as the fireworks show from the harbor was really spectacular.

Peanut Island is a bit crowded!

The weather was looking good, and Bruce and Anne arrived on Saturday, June 30th. We had planned to depart the marina late that afternoon to anchor at Lake Worth Inlet, but two things deterred that plan. First, as so often happens with boat projects, we were scrambling to finish a couple of jobs. Bradley was still working with a Yacht Tech technician to replace some sensors and a gasket on the small generator and Jeff the Yacht Doctor was finishing up some gelcoat repairs and some cleaning, which stretched well into the evening. Bradley, Bruce and I took a ride in the tender out past Peanut Island where we snorkeled and swam, then came back to store the tender on deck. This is the large, 18-foot Nautica tender that we had left behind when we went to the Bahamas, but now it was to come along with us. After giving it a good cleaning we lifted it up on deck with no problem. All that remained was to secure it in place with the special cables that hold it firmly on deck. Uh oh! The cables were nowhere to be found! Since we had left the tender behind for our trip to the Bahamas, we had not seen the cables in over two months. Where could they be? After searching every nook and cranny on the boat where they would logically be we had a horrible thought – had we taken them to Naples to store there? Yes, that’s most likely what we had done. But Richard, our Naples roommate, was off on a trip and the only way to get the cables (if they were there) was to drive over. So early Sunday morning I set off for a 5-hour round trip drive to Naples while Bradley, Bruce, and Anne made final preparations for our departure. Our backup plan was to buy some nylon straps to hold the tender in place – setting off without having it properly secured was not an option!

Luckily, the cables were indeed in Naples, so I grabbed them and returned to Palm Beach. Soon the tender was secure and we were set to go. The new plan was a mid-afternoon departure, heading straight out to sea and north to Charleston. We had to wait for the tide to rise a bit but by 3pm the lines were cast off and we were on our way. Passing by Peanut Island, where hundreds of boats and thousands of people competed for space and created navigational hazards made us anxious to reach the open ocean. But just as we passed through the inlet, we noticed our stabilizers were not working. They were flashing a message “backing” meaning they thought the boat was moving backwards even though we were not. While we expected reasonably calm conditions, we did not want to embark on this trip with no stabilizers! After a few phone calls and a check in the engine room, Bradley found and fixed the problem and we were on our way with all systems operational! 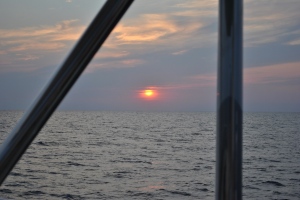 As evening fell, we found ourselves alone and making great time. We were in the Gulf Stream, benefitting from the strong current to add a few knots to our speed. We were averaging more than 9 knots, running our engines at 1025 RPM and burning just six gallons of fuel and hour. Not a bad start! Night brought a beautiful moon and continued calm seas with a breeze from our stern. We spent parts of our night watches in the flybridge enjoying the peacefulness. In the morning we were treated to a nice dolphin show and continued to make great time. Bruce and Anne, who have experience in smaller boats, were enjoying the overnight passage, though the guest cabins can get a bit bumpy on a passage as they are in the bow of the boat. But the reclining chairs and couch in the salon and the flybridge settee proved to be good places for naps!

The fishing poles were out and Bruce landed a small tuna. Another tuna was brought all the way to the boat before it got away. And we hooked a Big One – not sure what it was, but Anne saw it leap and noted that it had a big bill. It was definitely big but it took the hook right off the lure and escaped. The wind and waves picked up a bit – nothing too scary but enough to curtail our fishing for the second day as we had 4-5 foot following seas which would make it hard to land a fish. Our speed remained good (we even hit 14 knots during our daily 15 minute Wide Open Throttle run) and by Tuesday morning we were pulling into Charleston Harbor where we anchored near Ft. Sumter, a perfect place to view the fireworks. We wasted no time in launching the tender and going exploring. Bruce and Anne had lived in Charleston so were great tour guides. We went up Shem Creek for a lovely lunch, then on to Ft. Sumter which Bruce and Anne had not visited before. Most visitors to the Fort come on a tourist boat. You can come by private boat, but it is not set up to be real easy to do. At low tide, there is virtually no way to get onto the dock, but with a little creativity you can land on a nearby beach and walk to the entrance. The nice thing is that once the tour boat leaves, you have the whole place to yourself until the next boat arrives.

Bruce and Anne at Ft. Sumter

The 4th of July brought clear skies and bright, hot sunshine. We visited the Citadel, where Bruce had graduated in 1965 and is a member of the Athletic Hall of Fame for his wrestling. Bradley had also attended the Citadel, though it was just for a summer camp program when he was a teenager. The campus was very quiet but Bruce showed us all the sights and made a great tour guide. After a nice lunch we returned to the boat for a swim and to rest up for the evening’s festivities. After our two day passage, we all greatly enjoyed steaks on the grill as darkness set in and the first fireworks began. Once again, we were able to see dozens of fireworks shows – all along the skyline the sky was ablaze. The two largest shows – at Sullivan Island and on the Yorktown Aircraft Carrier/Museum were the grand finale and they were both spectacular. I can’t think of a better way to enjoy the 4th of July!

Ed and Marilynn visit for breakfast

On the morning of the 5th, our good friends Ed and Marilynn came for a visit. They have a house on nearby Folly Beach and we picked them up at Ft. Johnson for the short trip to Shear Madness where we enjoyed breakfast in the flybridge and a chance to catch up. After dropping them off, we loaded the tender back on deck, raised anchor, and set off for our next destination, Beaufort, NC., a trip of just over 200 miles. It was a pleasantly uneventful trip, again with following seas. We arrived in Beaufort the next afternoon and wanted to drop anchor for the night. We called our friends Billy and Linda, fellow Nordhavn owners from Beaufort, to seek their advice about our proposed anchorage and they gave it a big thumbs up. Then they jumped into their Boston Whaler and came out for a visit, bringing us blueberry muffins and homemade peach ice cream! I can tell you that getting ice cream delivered after a long night passage is really wonderful!

On Saturday, we continued on to Jarrett Bay, where we will stay for a couple weeks. It was time to get the docking lines and fenders out. The current was very strong and docking was not an easy process, but Captain Bradley handled the boat well and we had three people on the dock to help with lines, so soon Shear Madness was secure. Billy had offered to drive Bruce and Anne to pick up their rental car for their return trip to Florida, so we bid them goodbye. It was great to have Bruce and Anne along for this trip – Bruce helped with watches, engine room checks, and several projects and Anne was the official photographer (most of these photos are hers and there are actually some photos of Kathy in this post) and is a great cook! We hope to have them back on board again.

Scroll down below photos for the gory technical details. Click here to send us an email or leave a comment below. Don’t hit reply if you get this by email because it will never get to us!

Kathy with the elusive cables

Bruce, Kathy, and Bradley navigate out of the marina 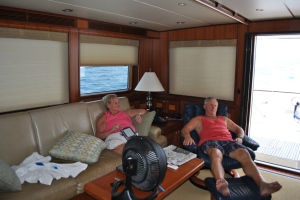 Anne and Bruce get the hang of cruising 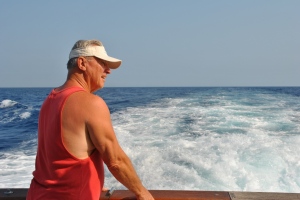 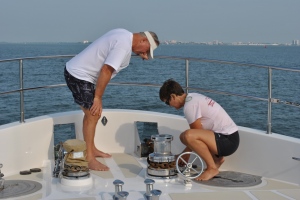 Bruce and Kathy ready the anchor in Charleston

Setting the snubber line on the anchor 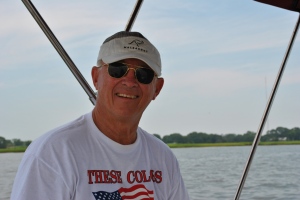 Bruce in the tender 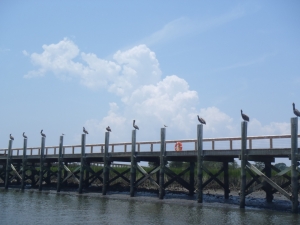 Bruce’s tuna made a great dinner! 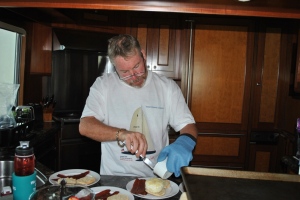 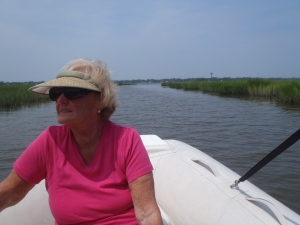 Anne in the tender

Bradley and Bruce at the Citadel 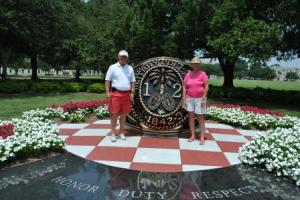 Bruce and Anne are color co-ordinated at the Citadel

Bruce at the Citadel Athletic Hall of Fame 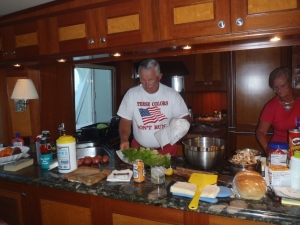 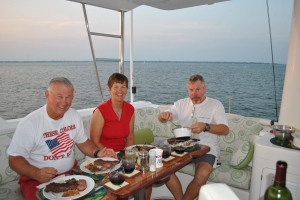 4th of July dinner on the Flybridge

Rinsing the tender before lifting on board

This entry was posted on July 18, 2012, 6:36 am and is filed under Trips. You can follow any responses to this entry through RSS 2.0. You can leave a response, or trackback from your own site.