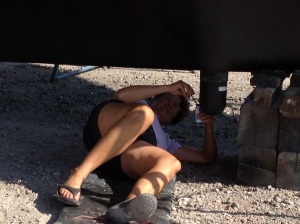 The first order of business at Jarrett Bay was to have the boat hauled out to assess the condition of our bottom paint (scroll down to technical details if interested). The haul out went smoothly and representatives from Core Creek Marine and Bluewater, the paint manufacturer, were on hand to develop a game plan for re-painting the bottom. Work commenced the next day and we hoped that our time out of the water would be limited to just two weeks. Since it is the tourist season in Beaufort, our house in Sea Gate where we stayed last time was not available for rental and we stayed at the nearby Core Creek Lodge, an inexpensive motel just minutes from the boat yard. We found newly renovated and clean rooms, helpful and friendly service, a room adjoining a full kitchen, and a wonderful gas grill, all right on the Intracoastal Waterway. 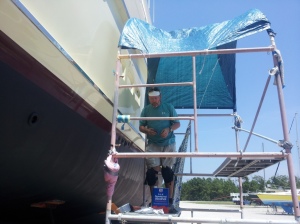 While the boat was out of the water we also decided to have the hull waxed again and contacted Bruce from Ultra-Bright who had done a great job last time. Soon he was at work and pointed out some rust stains coming from the hinges on the doors to the scuppers (these are trap-doors that open one-way to allow water to drain from the decks, but do not allow water to come in the other way). This turned into a typical boat project – start one job and find another! Each door was secured by two hinges, which of course are not easy to get to as they are on the outside of the boat and way up high, requiring scaffolding to reach. Each stainless steel hinge had to be removed, buffed by Bradley on a machine, then hand polished with metal polish by Kathy. Finally each one had to be re-attached and sealed with Sikaflex, a special adhesive weather-stripping compound, that is very messy to work with. You always end up with black goo on yourself and parts of the boat where you do not want it! All told, this task consumed more than 20 hours of time. 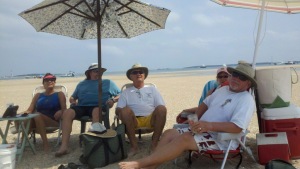 We had a chance to catch up with many of the friends we made last time we were here, including a wonderful dinner with Gene and Pat, owners of Jenny the Sea Gate dog and their new addition, Peepers, a baby duck that Gene (a duck hunter) has adopted and is raising. Their daughter Cathy, who owns Crystal Coast Interiors, invited us to a birthday party for her associate, Beth, where we met up with many of the Jarrett Bay folks who had worked on the boat last time. We also visited with Karl and Dianne and David at Sea Gate. At the boatyard, we re-connected with Steve and Linda Dashew on their boat Windhorse. Steve is a well-known boat designer who we had gotten to know on our last visit. We had a wonderful dinner out with them and our boats were nose to nose for a few days, allowing Steve to snap a very scary photo during a storm. We also had a lovely dinner with Billy and Linda from Southern Comfort and took a trip to Southport to visit our friend Nancy where we had a nice visit. Tony, a colleague from my Landmar Systems days, now lives in Greeneville, NC and stopped by for a visit. We also took a trip to the Raleigh area to visit Jordan, our dog, who lives there with

his foster mom, Meg. Jordan, who is now 13, continues to amaze us with his good health and zest for life. His shoulder and hips are pretty creeky now, but he doesn’t want to slow down! 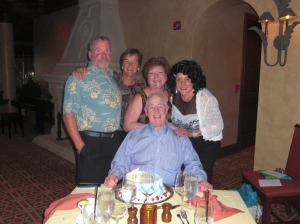 We were back in the water in just two weeks, a major accomplishment, and headed out to Cape Lookout for a few days of fun. Cape Lookout is just a two hour trip from Jarrett Bay so soon we were anchored and enjoying the chance to swim, kayak, and explore. We went ashore to see the Cape Lookout Lighthouse and museum and took the tender to Harker’s Island. Cathy and her husband Cory came out for a visit and delivered a part we had ordered and Pam, Lenny, Danny and Carole from Sea Gate came out in their boat for a visit and a day on the beach. They left us with delicious tomatoes and cantaloupe from their gardens – very yummy!

Next up was a 70 mile trip to Wrightsville Beach, about a ten hour trip. We planned for an 8pm departure and were actually underway by 7:30pm. Despite slowing the boat to less than 6 knots for the final two hours, we still arrived at the entrance to Masonboro inlet before sunrise. Fortunately it is well marked and gave us a chance to practice our entrance skills. Soon we were safely docked at Sea Path marina, where we left the boat for a few days to fly to Naples, FL to celebrate Bradley’s father’s 79th birthday. We will stay here in Wrighstville Beach for a couple weeks before heading north to the Chesapeake Bay. We don’t want to get there until September as we have very bad memories of being on the Potomac on August 25th last year! Speaking of which, I have now completed the epic saga of the lightning strike and ensuing repairs.

Scroll down for technical details. Check out updated book reviews. DO NOT REPLY if you get this by email – please leave a comment below or Click here to email us – we love to hear from you! I especially appreciate suggestions as to what you would like to see on the blog. 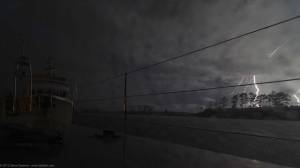 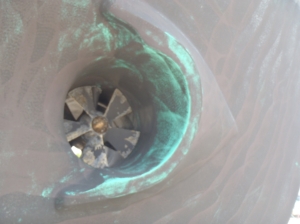 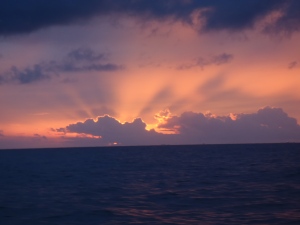 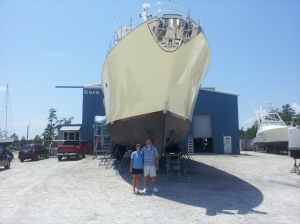 Tony from Landmark days comes for a visit

Nose to nose with Windhorse 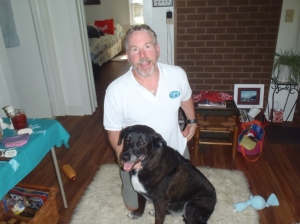 Bradley with Jordan in Saxapawha (near Raleigh) 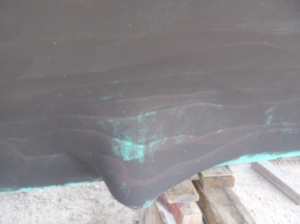 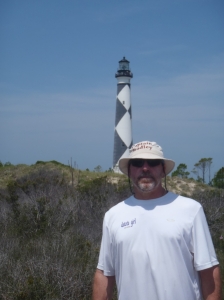 This entry was posted on August 8, 2012, 8:39 am and is filed under Trips. You can follow any responses to this entry through RSS 2.0. You can leave a response, or trackback from your own site.