We were ready for some R&R by the time we reached Lunenburg so we settled in to a nice anchorage and did a bit of exploring. We met our friend Captain George, who I had met last year at the Fisheries Museum. His wife Wendy was under the weather so we have yet to meet her, but George provided us with a nice bag of Nova Scotia scallops – they were fantastic!  We also had an excellent meal at Magnolia’s Grill but a truly bad one at Dockside, which has a great view but awful food.  We visited the weekly farmer’s market where we got some great German bread, some local wine, and a few other goodies. It was nice to see the Bluenose II back in the water – she is the replica of the famous Lunenburg fishing schooner back after a two-year re-fit in Lunenburg. 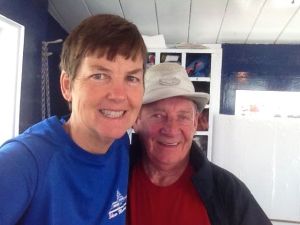 With Canada Day on July 1, we decided to move around the corner to Prince’s Inlet where we were invited to participate in the celebration at the Lunenburg Yacht Club. The move was only two miles as the crow flies, but 15 miles by water as we had to exit Lunenburg Harbor, go around the corner, and then back in to Prince’s Inlet. It was a beautiful day and soon we were tucked in to a nice anchorage just outside the yacht club where we were able to re-connect with several of our friends from last year. Bob and Edey came to the boat for dinner, then invited us to their house where we met Cheryl, who lives in Malaysia most of the year but spends summers in her home country. I also took a walk to see Susan and Paul, who run a B&B which was quite busy, making it impossible for them to come for a visit onboard. We also saw Ron and Nora who were gracious as always. Ron is the two-time former commodore of the Yacht Club and was heavily involved in the Canada Day celebration, which included a wonderful BBQ and a great fireworks display. Of course, this far north you have to stay up a lot later to see fireworks since it’s daylight for more than 16 hours!Our friends Jane and Jamie, who I had met last year at a Nonsuch sailboat rally at the yacht club, drove down from Halifax for a dinner onboard. Jamie, who is a professional photographer, took a beautiful photo of Shear Madness. We wish he could join us on the next legs of our trip as I’m sure the scenery will be spectacular and he’d be the perfect person to capture it.

I was able to go out for a nice bike ride and decided to head out Second Peninsula Road, where last year I had met Wilifred, the 91 year old, who was out tending his garden. At that time his wife was recovering from an accident in a rehab hospital so I was curious as to how they were doing. As I approached the house after a nice uphill ride, I saw two people out painting the porch. Not sure who they were, I decided to stop and inquire. As I approached I noticed a woman sitting on the porch who I correctly surmised was Wilifred’s wife. The painters were their son and granddaughter and I stayed for a nice visit. Wilifred and his wife are doing fine and his garden is as beautiful as ever!

With Tropical Storm Arthur threatening to become a hurricane and visit us in Nova Scotia, we decided it was time to head a bit further north to the Bras D’or Lakes where we would find good protection. Ron was nice enough to chauffeur us to Costco for a final provisioning trip followed by a visit to The Chickenburger, a classic and iconic Halifax eatery, founded in 1940, which we greatly enjoyed. With Arthur now a Category 1 hurricane, we decided to get moving as we had a nice weather window.

Shopping for lobsters right off the boat

Bradley will be providing further details of our passage and storm preparations in a separate post, but our trip was good, marred only by thick fog the entire 30+ hours! This necessitated keeping a very close eye on radar and regular use of our fog horn, but we arrived without incident at the St. Peter’s Canal. In order to enter the Lakes, we need to pass through one lock, so we had a short wait. At the entrance to the canal, a lobster boat had passed us and was docked on the other side of the canal. We shouted over, asking if they had lobsters to sell. The answer was Yes, for $5 a pound! I didn’t waste any time taking two big buckets across to gather six nice lobsters totaling 11 pounds. At least we would have a great pre-hurricane dinner! 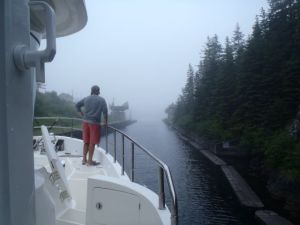 Heading through the St. Peter’s Canal in the fog

Soon we were through the canal and glad we had a track to follow to our anchorage at Little Harbor. We had been there last year and our navigation software keeps a record of our previouse “tracks”. As the fog was still heavy, visibility very poor, and the channel a bit tight with some narrow passages, we were navigating mostly by following our previous track with everyone keeping a keen visual watch to identify every marker and every blip spotted on the radar. We arrived safely at our anchorage and soon were securely anchored in a good spot. All that remained was to cook the lobsters! Although it was a nice evening, the flies were out in full force and they bite as if they are starving, so eating outdoors was not an option. Thus, we had to prepare the salon for lobster eating, which was accomplished by spreading out a large work blanket below our table and a sheet as a tablecloth to catch any flying bits of shell or meat. It worked great and Chef Bradley cooked the lobsters to perfection. Half were eaten with the rest safely secured in the fridge for another day.

Now we are just waiting for Arthur to arrive (he has already left the US and made it to the south end of Nova Scotia). It looks like he will be a tropical storm and will bring some moderate winds with some nice gusts, but we are well protected and feel very secure. We will report more very soon as Bradley has promised to deliver a post by tomorrow! Click any photo to enlarge.

Sailboat racing at the yacht club 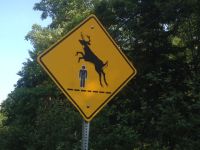 Apparently the deer here are HUGE. Three times the size of people and they like to jump over you. I didn’t see any of these, just normal deer.

Kathy with Lydia and Nora

Shear Madness in front of Ron and Nora’s house 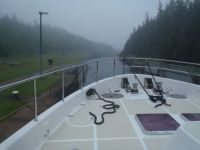 Kathy and Bradley waiting at the lock on the St. Peter’s Canal 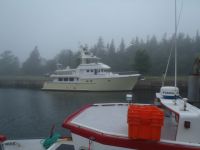 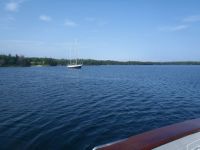 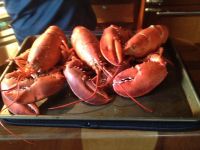 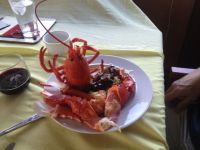 Very nice presentation by the chef 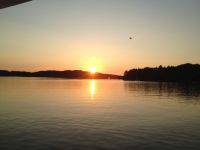 This entry was posted on July 5, 2014, 10:31 am and is filed under Trips. You can follow any responses to this entry through RSS 2.0. You can leave a response, or trackback from your own site.